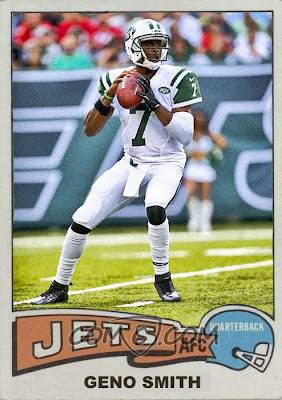 We're three weeks in, and ALREADY this is an insane football season. It took three weeks. THREE WEEKS. That should be some sort of record, even though it probably isn't.

Case in point- the Jets are 2-1. Think about how awful they were last season. They weren't just awful. They were downright pathetic. Mark Sanchez spontaneously turned into Jimmy Claussen. Not good. It took a couple of unloaded contracts, a crapload of new blood, and Geno Smith, to turn this team into a 2-1 team. Their only loss thus far was against the overstacked Patriots.

I have no idea if this streak is going to last much longer, but wouldn't it be fun if it did? Wouldn't it be like some sick practical joke Rex Ryan's playing on everybody. Hell, at this rate the Super Bowl is gonna end up being the Ryan bowl.

Actually, I hope not.

Coming Tomorrow- A terrific player for the Seahawks. So basically, I could be talking about anyone in their core offense.
Posted by Jordan at 7:46 PM