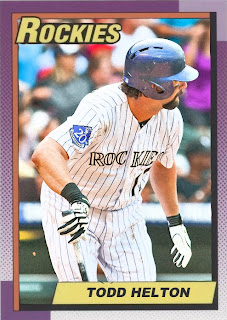 Back when I heard the news of Chipper Jones retiring, I went into a full on backstory on my history with Backyard Baseball. And because I thrived so much from that game as an 8 year old, one of these days I might need to do another post on the game. As for right now, another one of the players I met through that game has just announced his retirement.

The people who made the game were never very flattering when it came to physically rendering stars into animated forms. Randy Johnson was a tall, skinny kid with a mullet. Ichiro was a pale, quick kid. Ken Griffey was a smaller black kid. Thome, Thomas and Bonds all looked massive. But Todd Helton had a very minimalistic design. He was an average height, kinda skinny, white guy, only distinguishable by his Rockies uniform.

I don't remember if I played him at all, but I imagine I might have. He was useful in leadoff positions, like Chipper Jones, but I remember him being more of a raw hitter in the game. And around that time, which was 2002, I had begun sorting my dad's baseball cards on a whim, and he had picked up one or two packs of newer cards. One of those cards was a 2002 Topps Own the Game insert...of Todd Helton, which was awesome. I remember looking on the stats on the back, and being glad that he was as good as the version of him in my computer.

Todd Helton announced his retirement today, and like with Chipper Jones, I knew it was coming eventually, but I feel like Helton has more to do. If he kept at it, he could hit 3,000 hits, or maybe get some more home runs, and further cement his borderline Hall of Fame career. But he's leaving after this month, and it'll be sad to remove his cards from my active binder, and put them in the retired binder.

Still, there will always be Backyard Baseball, and there'll always be the thin, skinny, beardless computer simulation that kept on going.

Coming Tomorrow- A Blue Jays prospect traded for R.A. Dickey, who's now one of the few people still doing alright on the Mets.