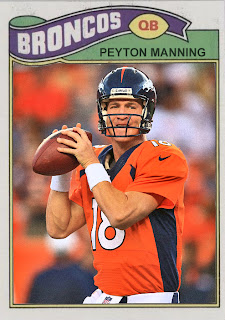 So I have to go over a few things, because right now things are getting very weird over at Mint Condition. Like, Rick Ankiel in 2001 weird.

First of all, my readership has spiked aggressively in the last week, because either a lot of readers or a lot of bots are really liking my RG3 post/Incredibly Wrong Football Predictions. I mean, it's possible that the post was filled with so many good thing about different teams that a lot of people have read it, but I don't think that about 800 people would flock to my blog in a week's span just for a post on football predictions. After all, this is primarily a football card blog.

Besides, the bots are usually good at spiking posts that really don't need to be spiked. I had a post in January 2010 about simply waiting for 2010 Topps, that wasn't much more than a few sentences and a Michael Vick slam. The bots really ate that one up, so much so that last year I rewrote it and made it worthy of that much viewership.

Besides, usually the bots go for posts with banal sounding names, or scantily clad women. Last time I checked, Robert Griffin III is not a woman (though he sure played like one last Monday). I guess people really like the post because of it's length, or something. It's a mystery to me.

Nevertheless, I will post another prediction post tomorrow, which is a challenge to any bots reading this. Go ahead. Make my day.

Speaking of football predictions, I should probably go over the ones from last week.

Patriots-Bills: I predicted a Pats win, and that's exactly what happened, save for a nice fight by EJ Manuel. Point for me.
Bengals-Bears: I predicted the Bengals would win by three, and the Bears won by three. How's for that kinda irony. It was close, though. 1-1.
Dolphins-Browns: I obviously chose the Dolphins to win, which they did. Go me. 2-1.
Falcons-Saints: I predicted a very, very close match here, though I said the Falcons would come out on top. They didn't. The Saints ran away with it. 2-2.
Buccaneers-Jets: Of course, being a man of common sense, I predicted the Bucs would win. However, the Jets somehow snuck past them and won it. This is disappointing, though at least the Patriots got them back on Thursday. 2-3.
Titans-Steelers. I predicted a Steelers win, and the Titans, the largely pathetic Titans, ran away with it. 2-4.
Vikings-Lions. I predicted a high-scoring game that the Vikings would win with 35, the Lions with 24. The scores were exactly flipped. Gah. 2-5.
Raiders-Colts: I guessed it would be an all-out-bloodbath, but the Raiders actually played a decent football game. Yet the Colts still came out in the end. 3-5.
Seahawks-Panthers: I did end up with the right outcome, but I guessed the Hawks would in by 21, when it was a much closer game. Still, I'll take it. 4-5.
Chiefs-Jaguars: I bet on Andy Reid taking it, and I bet on Blaine Gabbert losing it. In Vegas, I'd have gotten myself a nice say. 5-5.
Packers-49ers: I'm a Packer fan, and even though the game was evenly matched, I still saw the Niners coming out on top, which they eventually did. It wasn't a pleasant one to predict, but I still got away with it. 6-5.
Cardinals-Rams: This, to me, was a battle of who was the least awful. In my book, the Rams barely edged out the Cards. It also actually happened. 7-5.
Giants-Cowboys: This one is infuriating, simply because HOW ON EARTH DID THE COWBOYS WIN THIS ONE? I honestly thought the Giants were the better team. Grrr... 7-6.
Eagles-Redskins: Another embarrassing one. I thought the Redskins would take this easily. I should have seen the writing on the wall during RG3's preseason games. Well, the Eagles damn near crushed them. And I thought that they'd be crushed. Me, the Eagle fan. Augh. 7-7.
Texans-Chargers: This one was basically common sense, but it was a lot closer on the ballfield. The Texans, in my opinion, were much stronger than the Chargers, and it turns out I was right. 8-7.

So, I guess I won that one, 8-7. This week, I'll do a custom of whoever I want. Probably somebody from the Eagles.

Coming Tomorrow- Newly traded veteran running back, who had a great day in Week 1.
Posted by Jordan at 11:14 AM
Labels: Broncos, Custom Cards, football, Peyton Manning