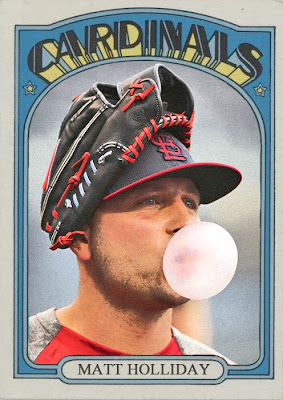 You can probably guess why posting Cardinals customs has become such a chore for me. I don't particularly love the team, but when they're playing well, I kinda have to make some customs. Good news is that every once and a while I get to make a good custom I don't really hate too much, like Holliday up there.

The reason I'm posting this Genuinely Awesome Holliday (or GAH) so damn early is because today is the first day of my senior year of high school, and I need to kick things into full gear yet again. So I'm getting up exhaustingly early and throwing the custom out there early enough that I don't end up forgetting it late at night, you know, like I've done 3,000,000 times this year.

Good news is I'm on my last lap until college, which is fitting, because the MLB season's in its last month until the postseason. I imagine the postseason will be slightly less exciting than my college education though.

You know, unless the Yankees squeak in there.

Coming Tomorrow- I'm like a month late on this one, but a former White Sox star traded to (where else?) Arlington.
Posted by Jordan at 6:41 AM