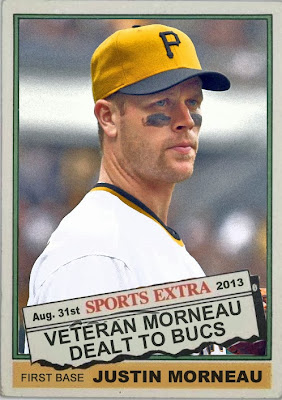 I know it's old news, but really, it still works. Also, it's a bit surprising how weird Justin Morneau looks in yellow. Almost as weird as Andy Reid wearing a red coat.

This card may be old news, and this team may be old news, but the season's almost over, and it looks like they're gonna be news for at least another week. I mean, I know that the Cardinals unfairly womped them in the standings (I know, womped SHOULD be a word), but really, people are still gonna be talking about the Pirates, because exactly five years ago they were awful. Actually, no. July 2009 was the absolute low point. That's when they got rid of their two huge contracts, and all they had the rest of that year was Andrew McCutchen.

So really, the Pirates are meant to be talked about. At least in 2013.

Coming Tomorrow- The closer for the Dodgers. Yep. I already made the custom, so there's no way any Giants fans can stop me.
Posted by Jordan at 6:28 AM