Sorry about the two-day gap of non-postingness. Everyone needs a day to focus on other things, including me.

But who am I kidding. Back to the box break. Eight packs are left, and we haven't had any non-base inserts, even though we're supposed to get those. This post will change that. 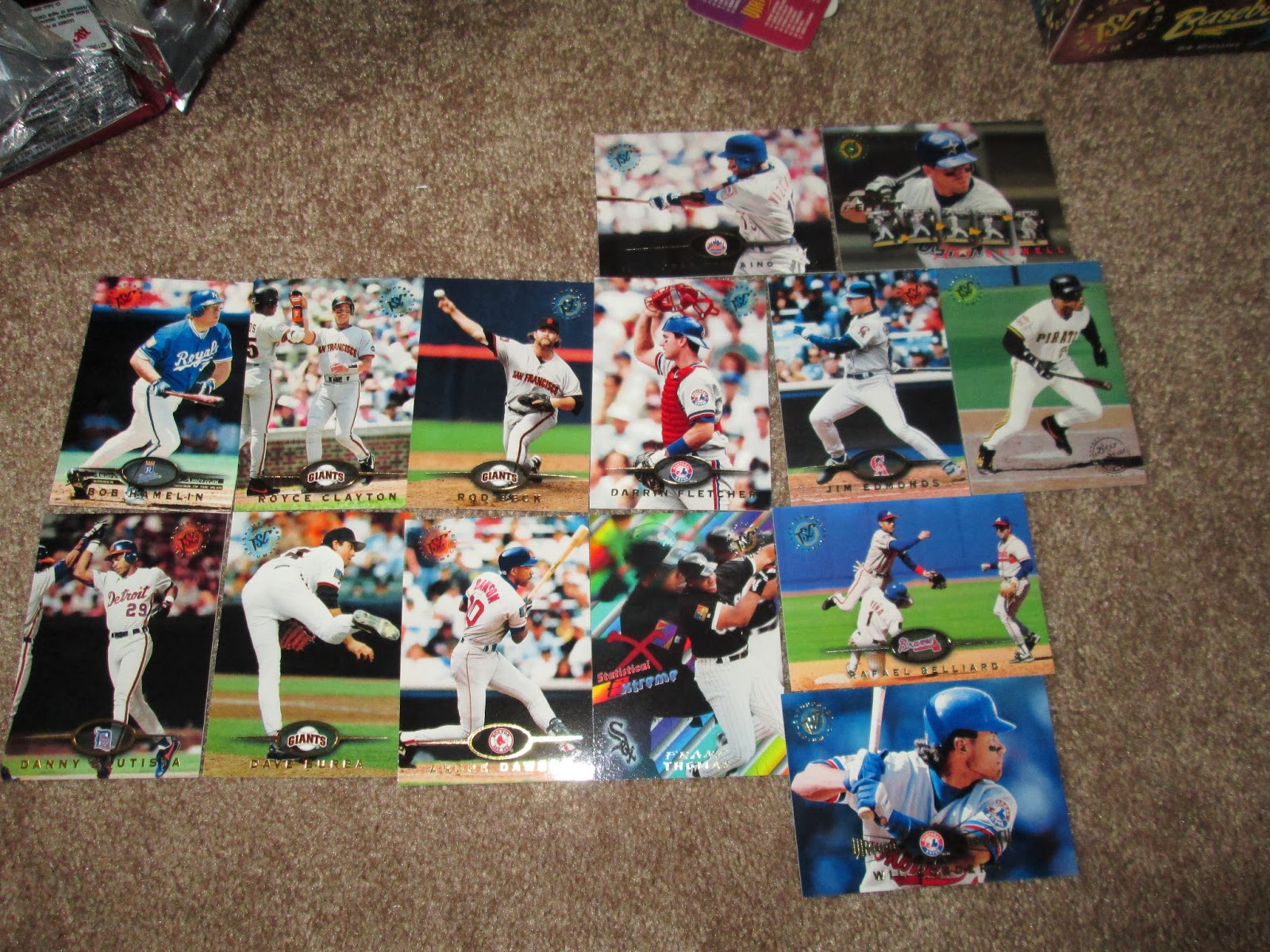 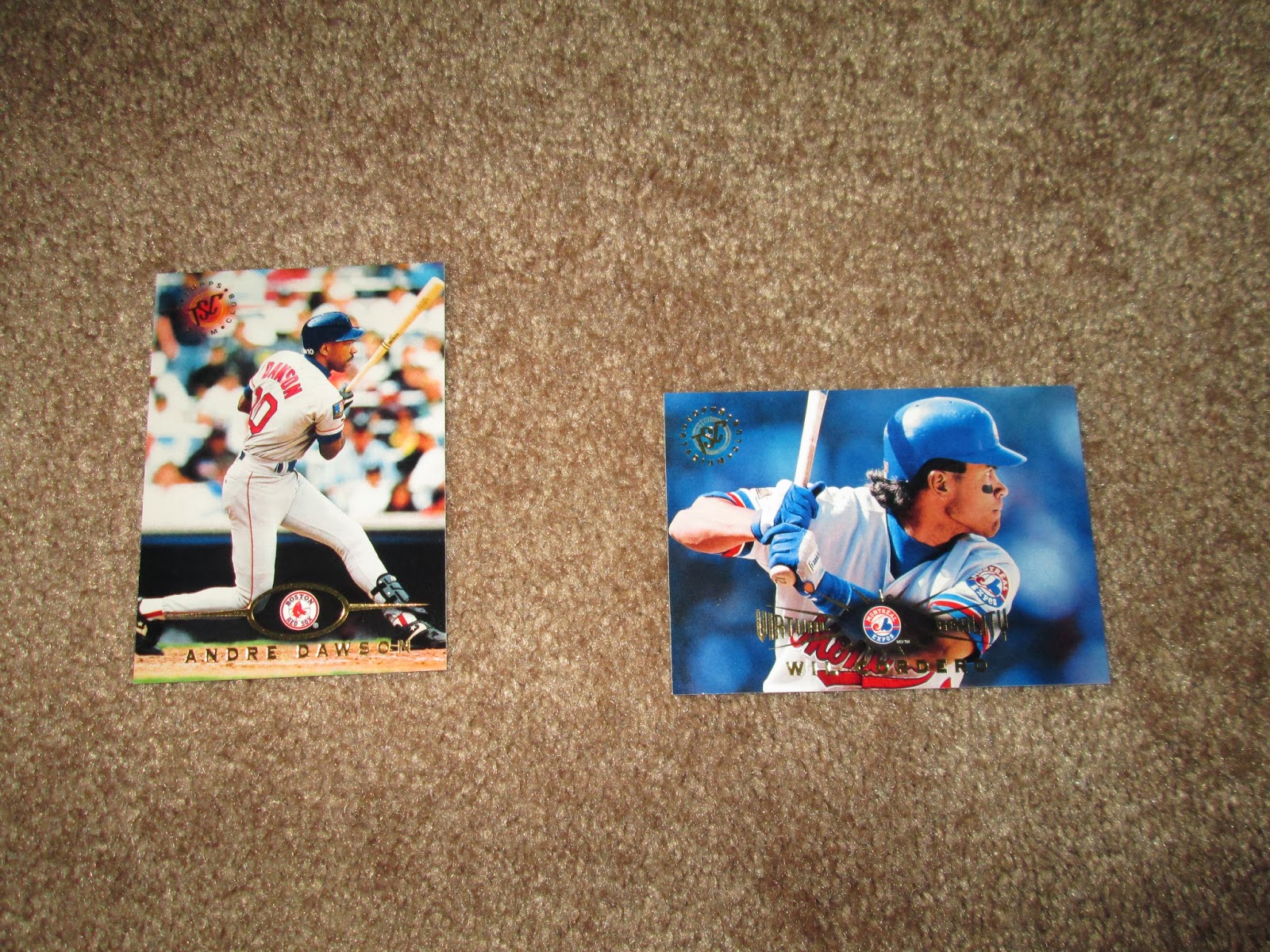 Two base card standouts. I do not have enough cards of Andre Dawson on teams that are not the Expos or Cubs. I have two or three (now) of him on the Red Sox, and one card of him as a Marlin. Still, it's a pretty awesome card.
I absolutely love that Wil Cordero card, especially considering that it's a Virtual Reality insert. So blue.
But, we did get a pretty big insert in this pack, and it's timely. 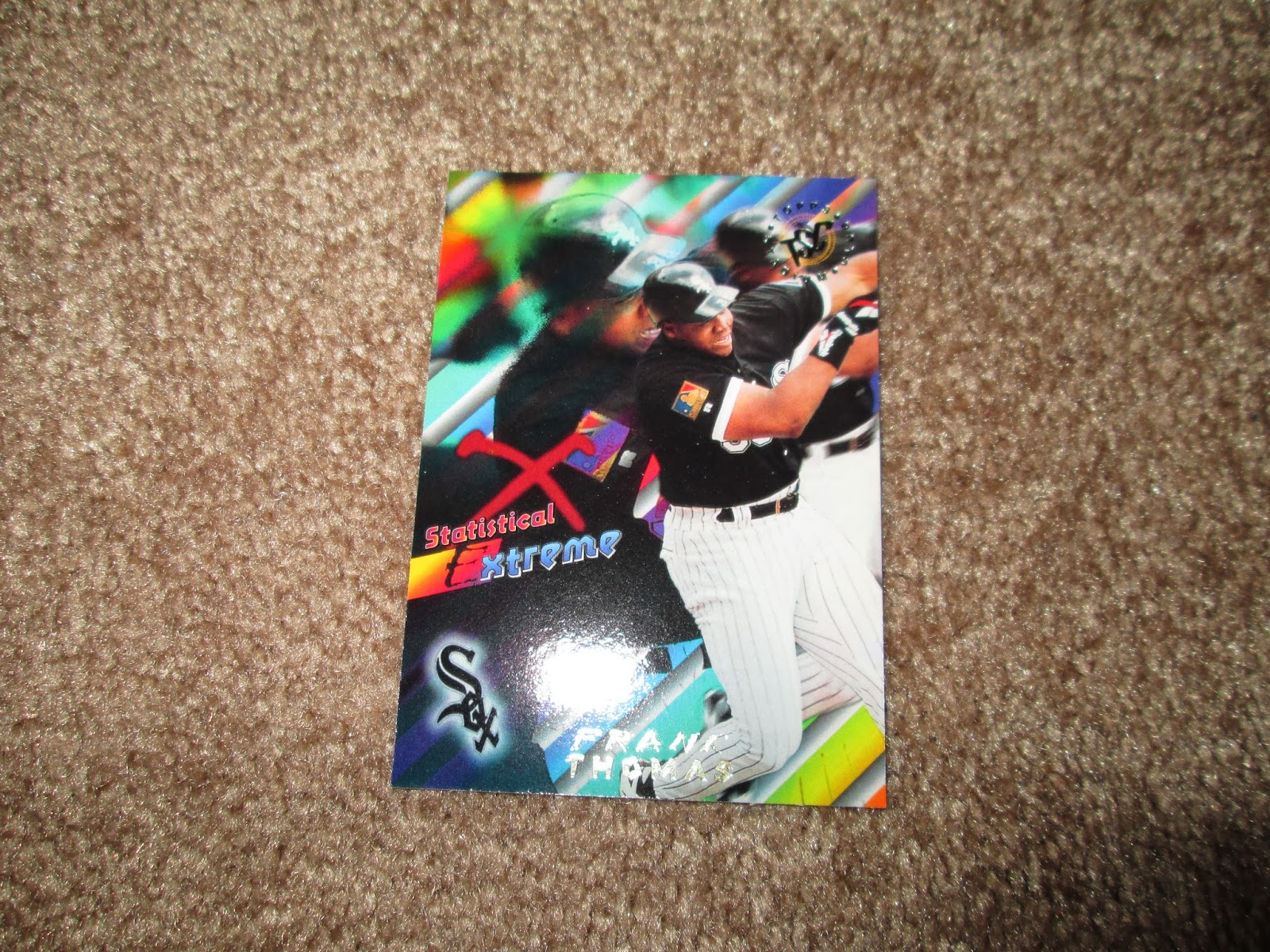 This is a Statistical Extreme card of Frank Thomas. Oh, what was that? It's 1995? Oh, so it's spelled X-TREME! Also, since it's 1995, the whole card has to be a mess of color and blurred repeat shots and cool lettering. This may have been Topps' 'up yours' to 1995 Fleer.
Also, I'm glad I got a Thomas, being that he'll be in bronze come July. 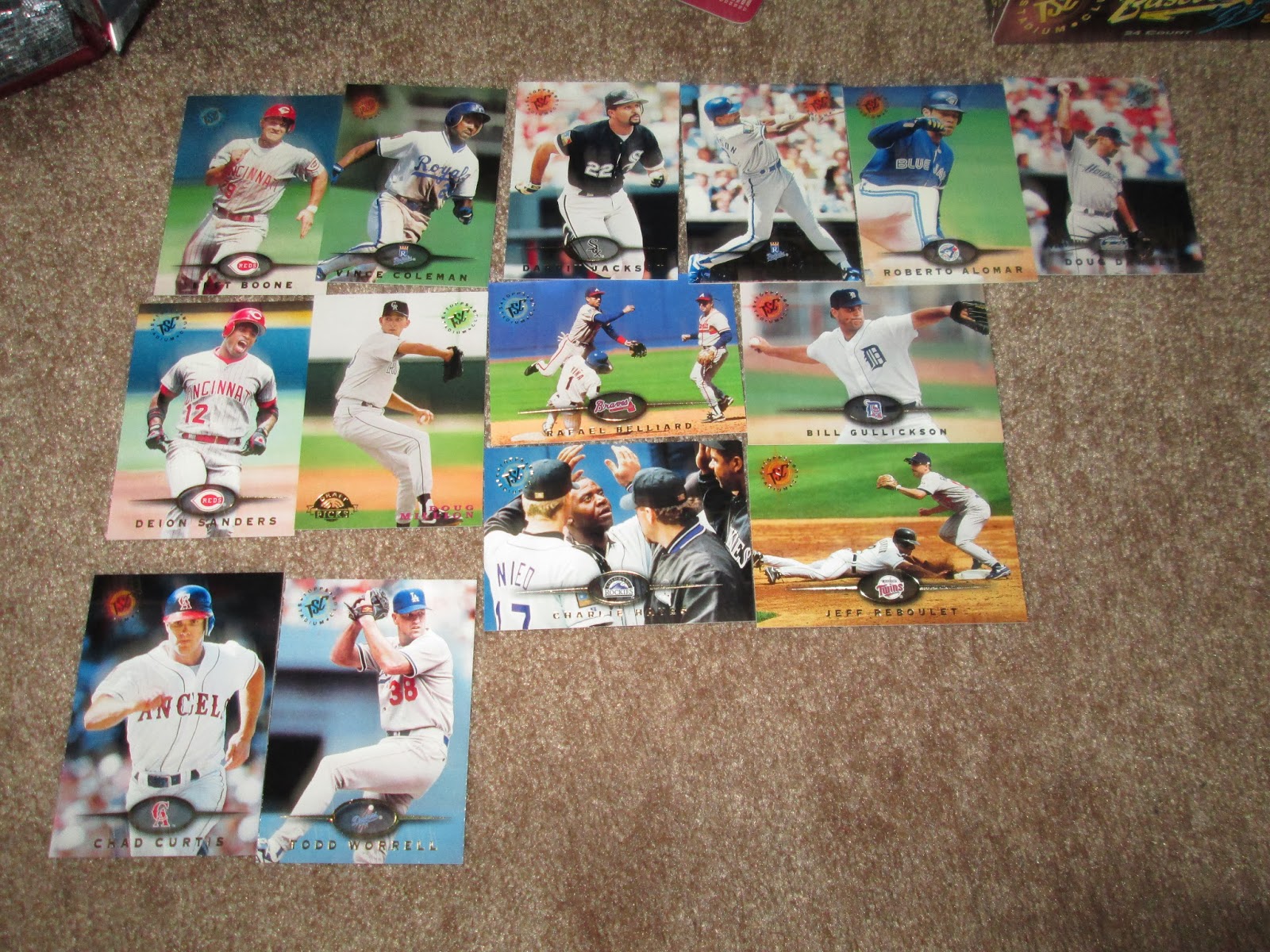 Pack 18- The doubles take over 9/10ths of the pack, with the two lone new cards consisting of Chad Curtis and Todd Worrell. Man, this pack sucked. 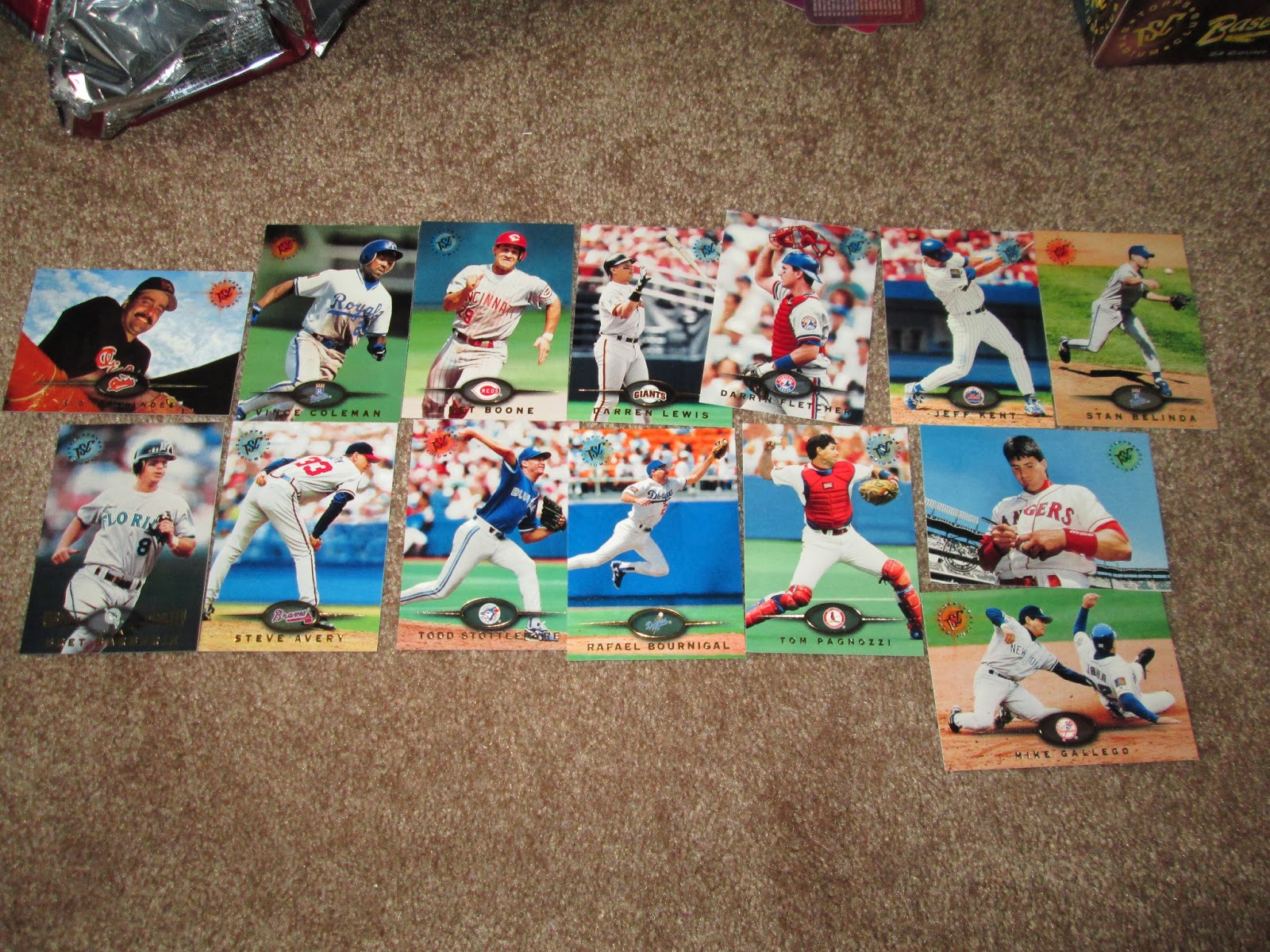 ﻿
﻿
Pack 19- Another double-heavy pack, though this one had a lot more going for it.﻿ 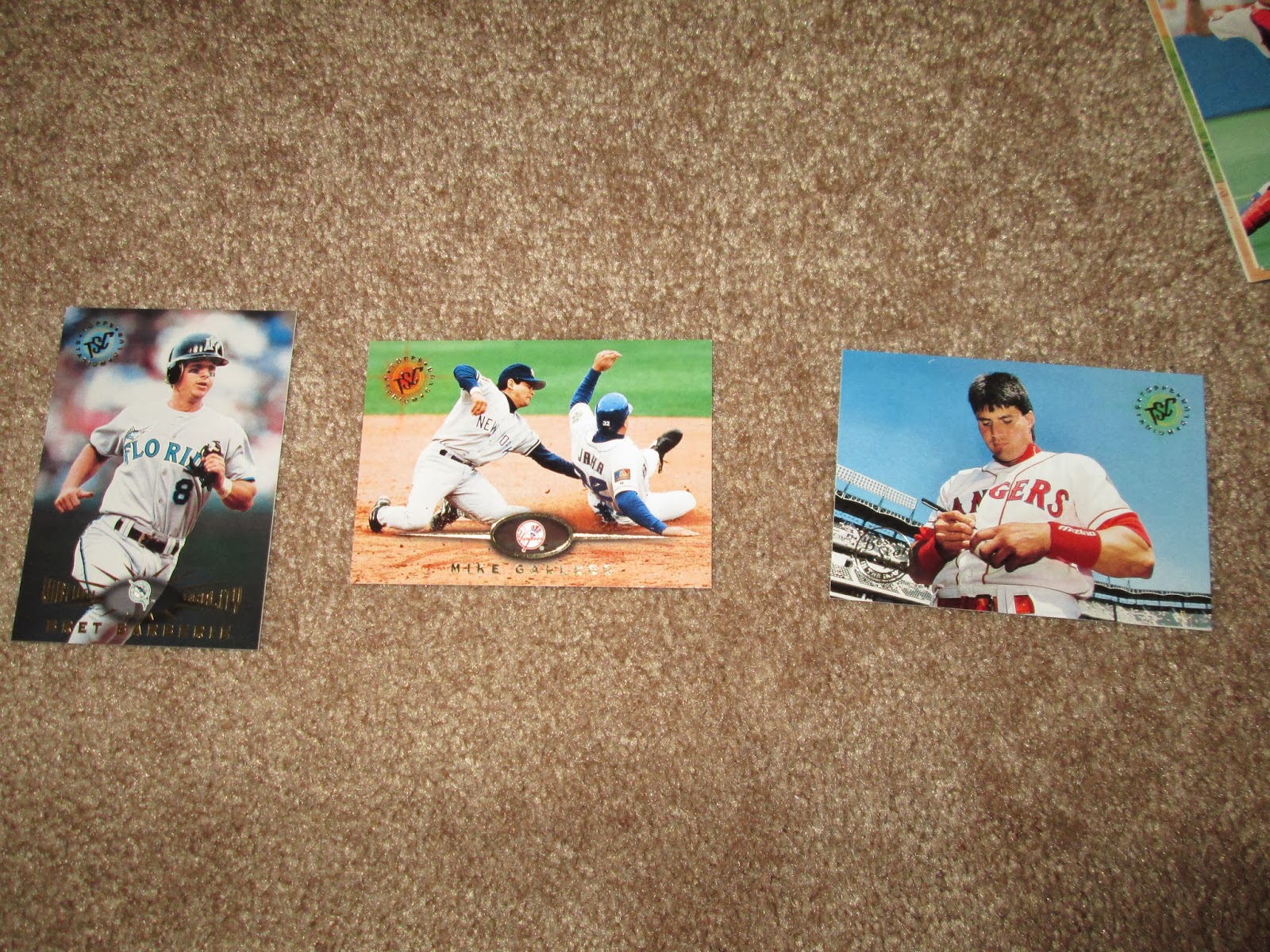 There's a Virtual Reality card of Bret Barberie, a nice action shot of Mike Gallego, and a Best seat in the House insert of Jose Canseco, who will only live on in households whenever parents have to explain who he was whenever their kids watch Liar Liar for the first time. 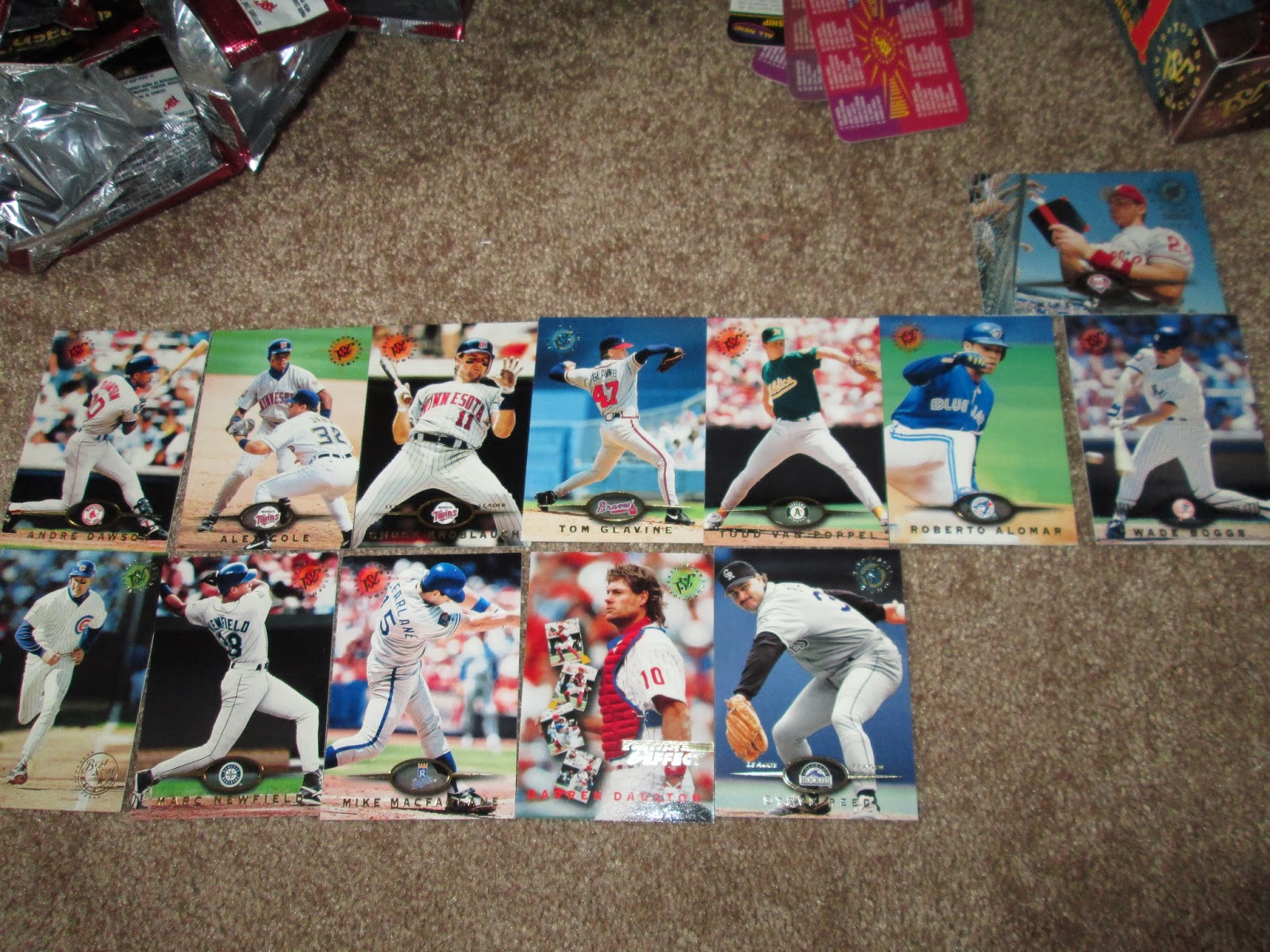 Pack 20- And the doubles keep coming. 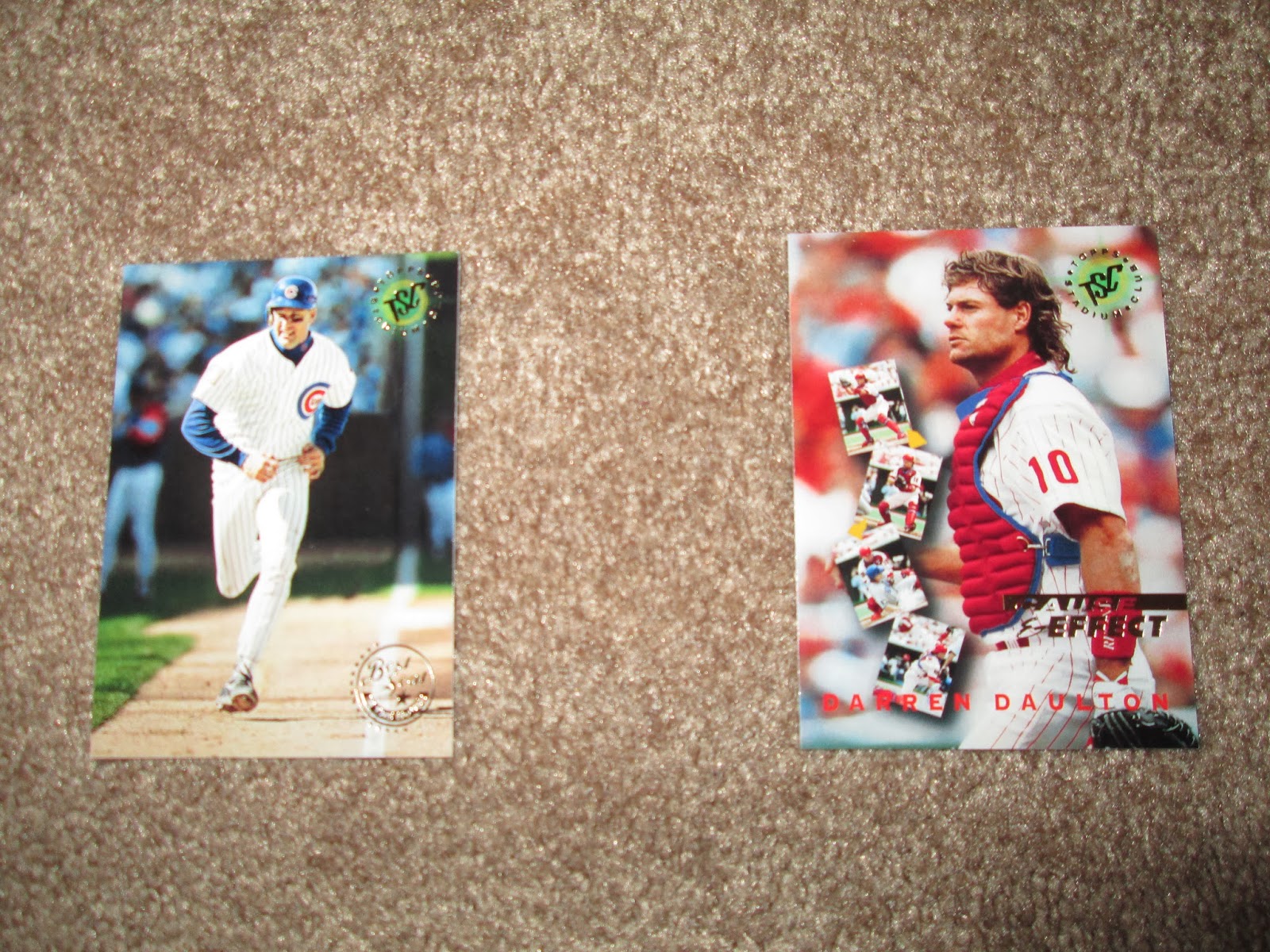 Two inserts of people that might have been big stars in 1995 will remedy this. Mark Grace gets a Best Seat in the House insert, while Darren Daulton gets an ultra-cool Cause and Effect insert. I don't collect Daulton, but that's awesome. 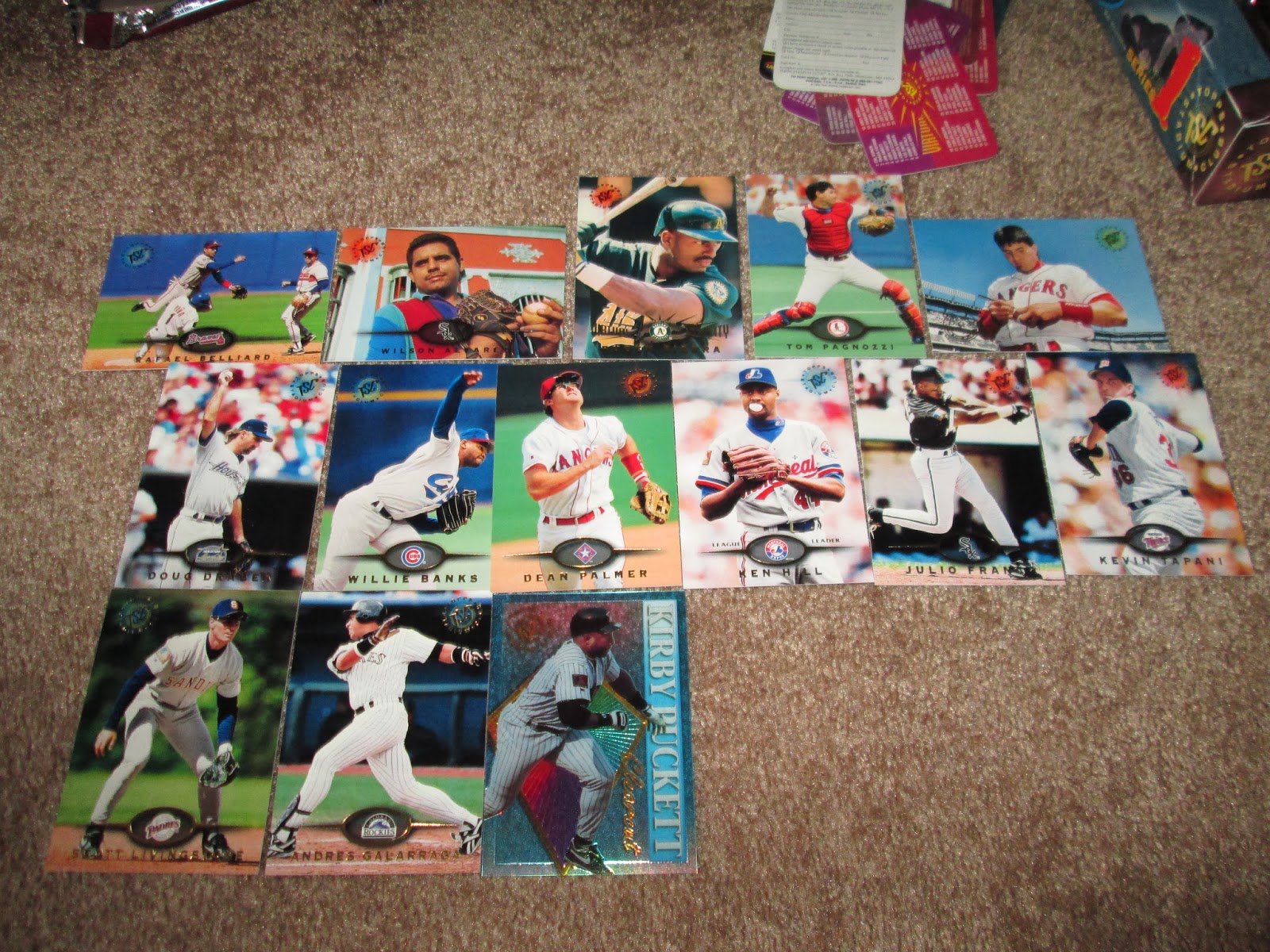 Pack 21- Nothing too special in this pack, as there's a base card of Andres Gallaraga, which WOULD HAVE been the pack highlight, had this pack not contained the second big insert of the box. 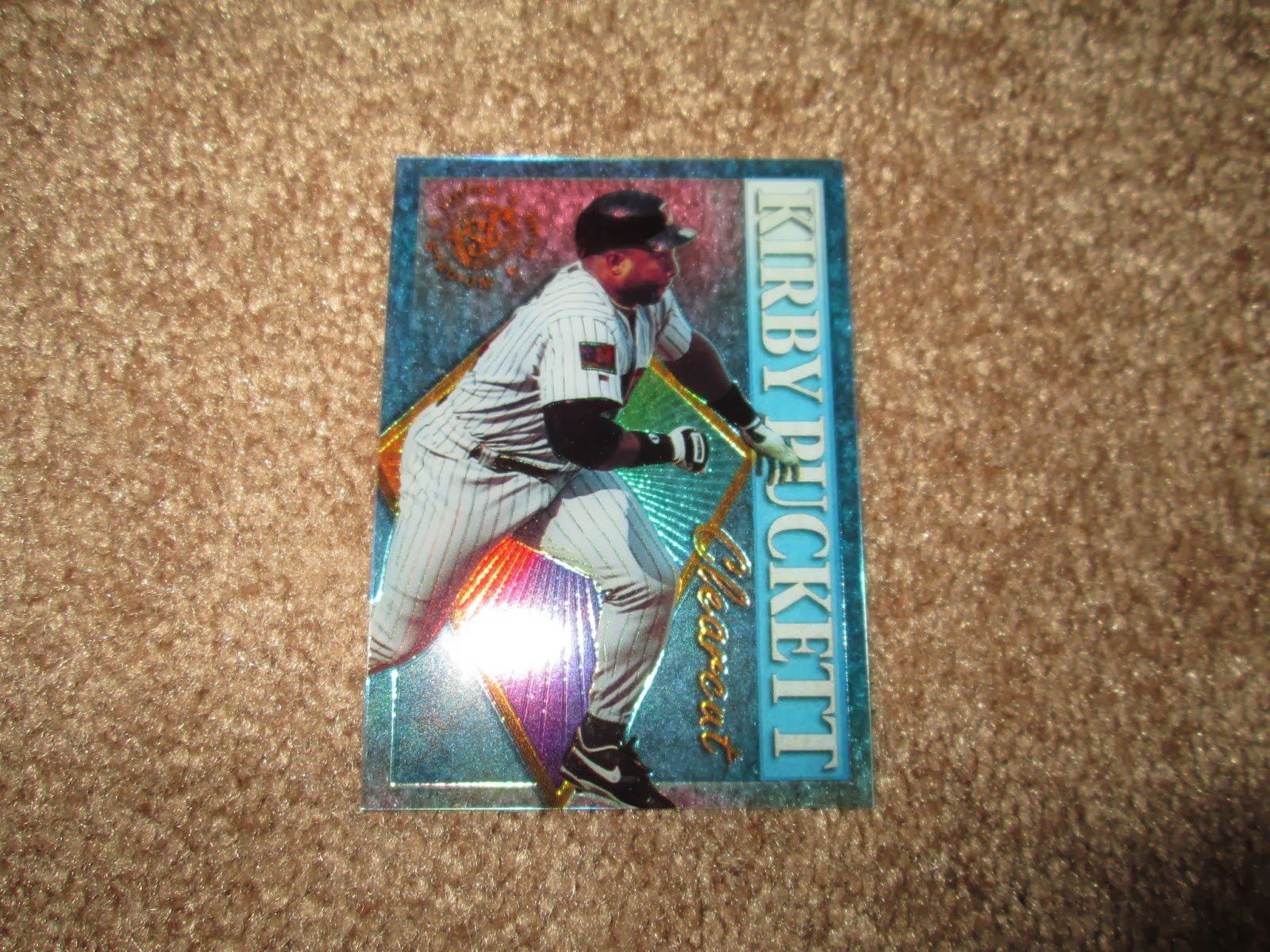 This is one of the most awesome inserts I have ever pulled from a box. It is a Clearcut Insert of Kirby Puckett, which is a pretty nice pull, as Puckett is a Twins legend and Hall of Famer. Also, this card is so damn cool- it's translucent, and made from a thinner plastic, so it's more pliable than most cards. It's so damn cool, in pretty much every way.
This would be my box hit, as it is 1:24 packs. As box hits go, it's pretty damn nice. 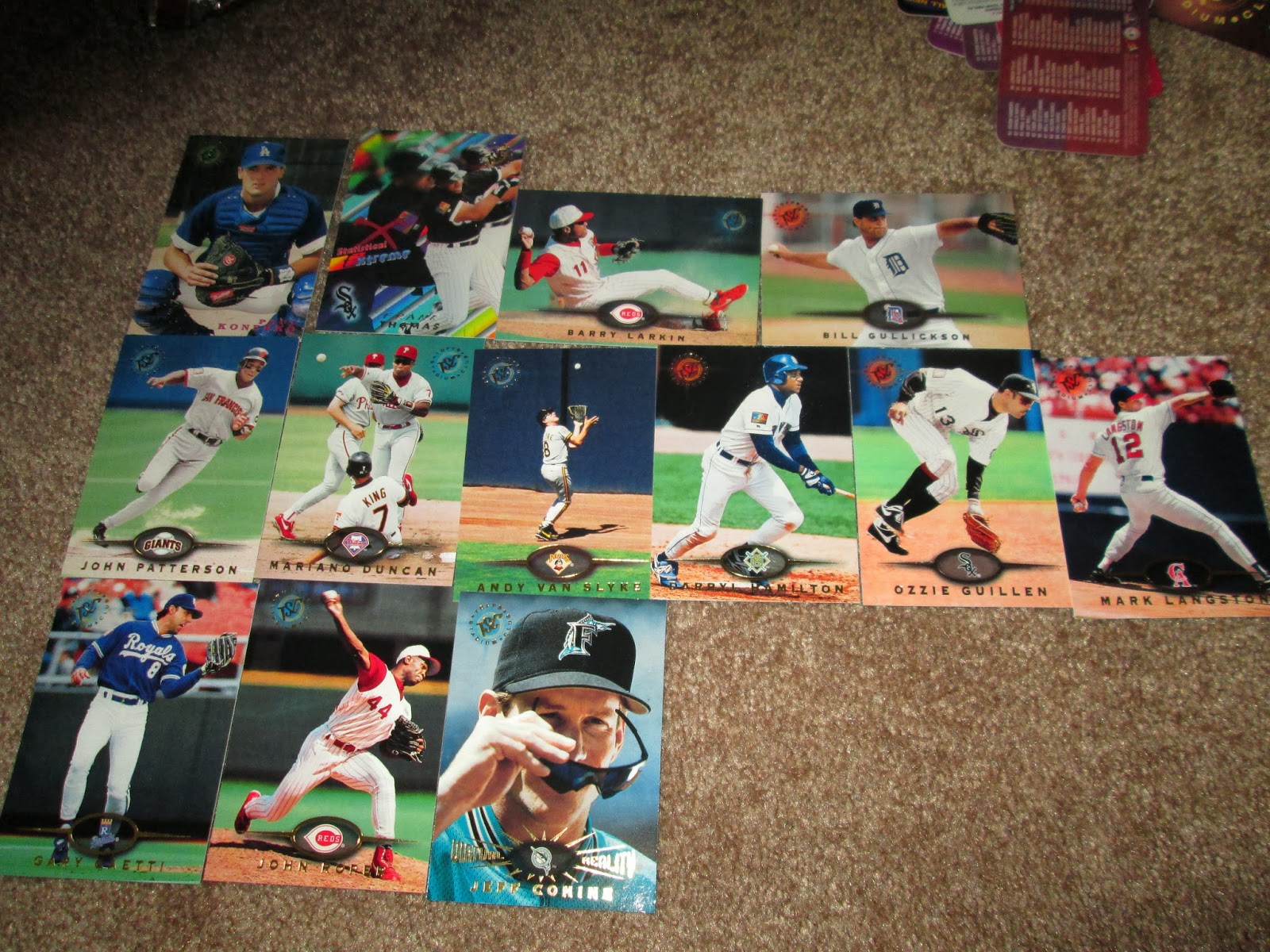 Pack 22- Proving my awful collation, the big Frank Thomas insert shows up AGAIN, along with the Larkin and Konerko. However, this pack also yielded an awesome base card. 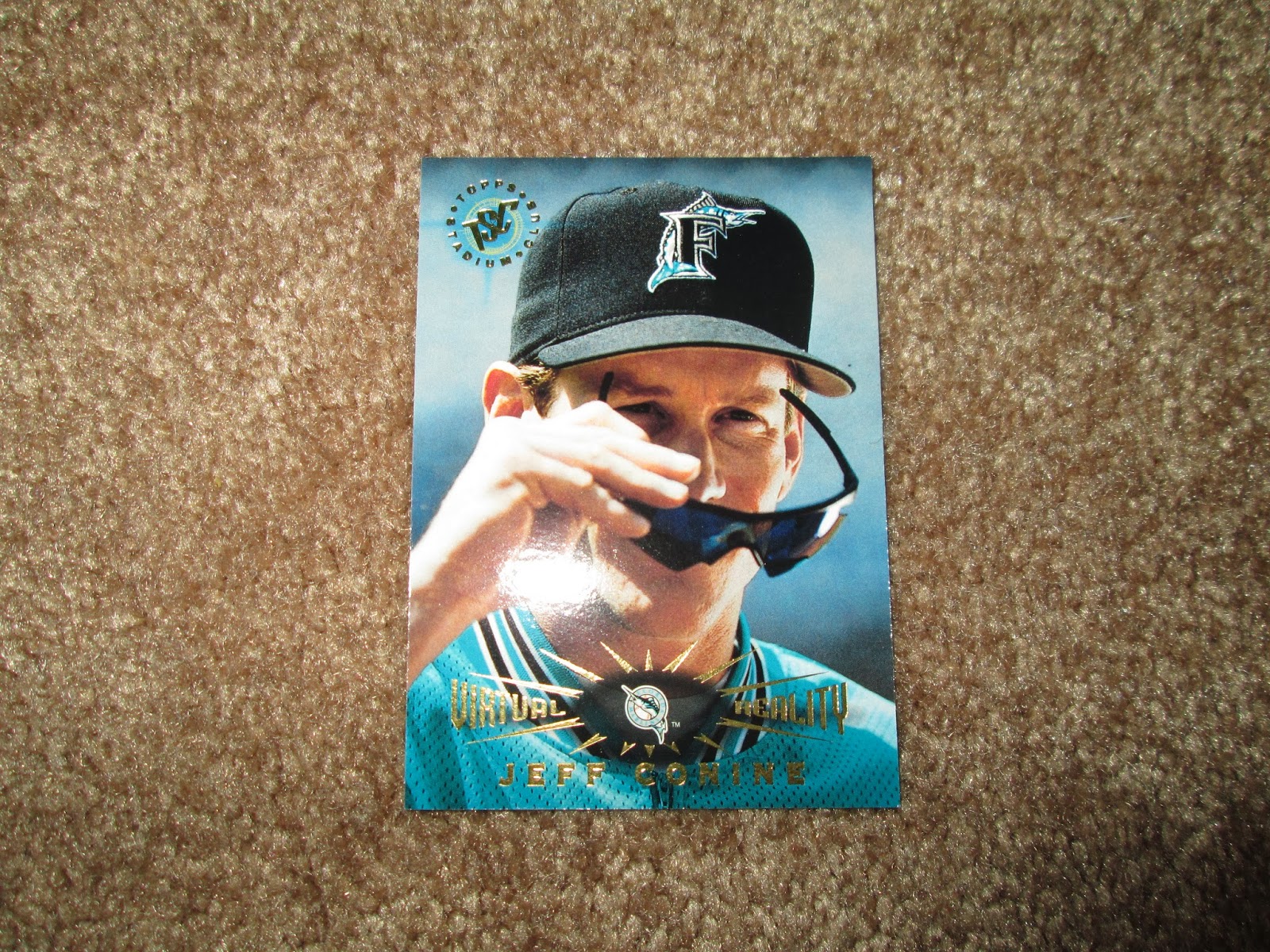 Just look at that. That is absolutely amazing. It's a Virtual Reality insert of Jeff Conine, but it's so suave, so 90's. That said, it looks like a quip from any CSI Miami episode, as in "Maybe those Phillies should...go fish." YEEEEAAAAHHHHHH! 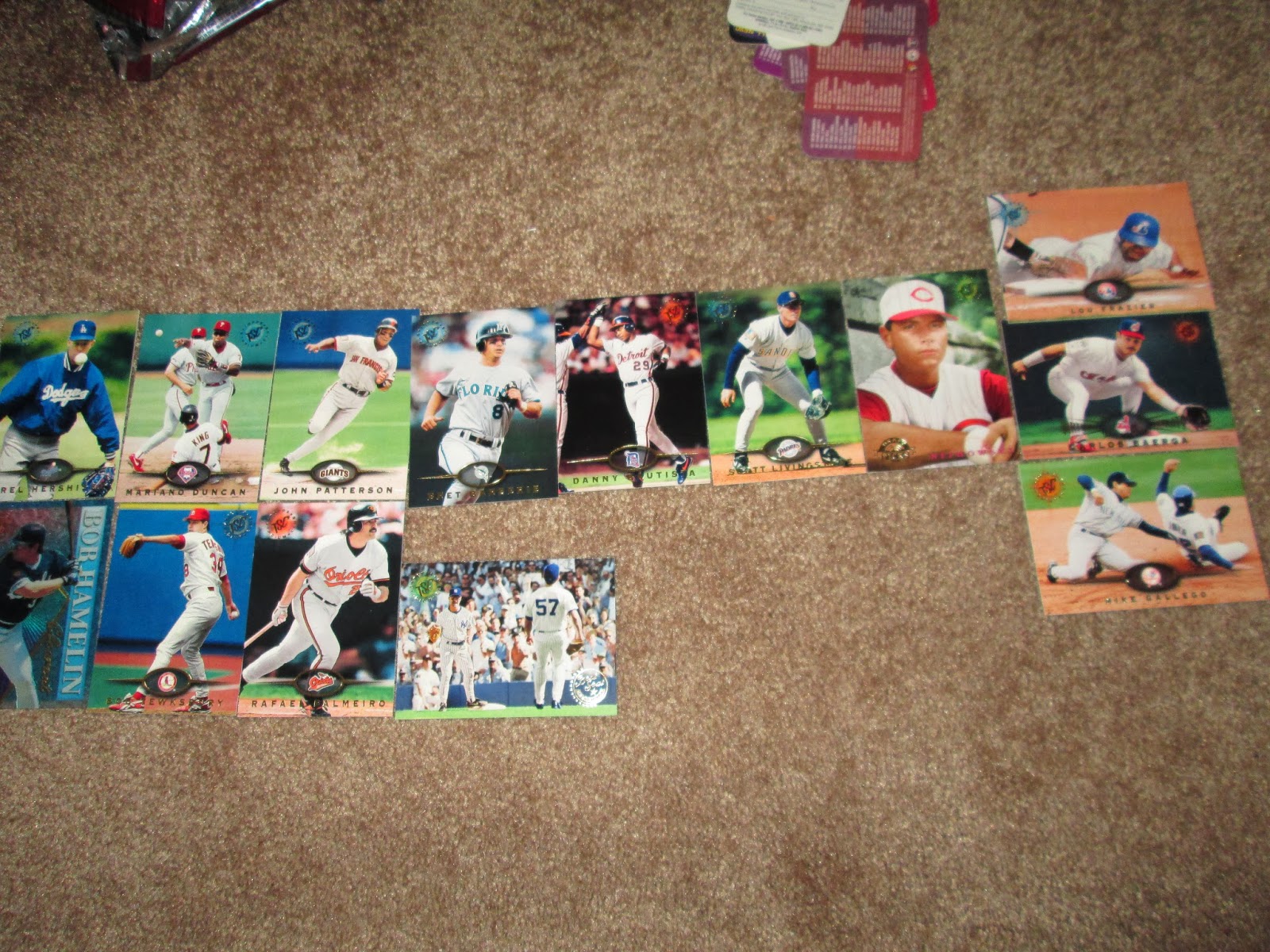 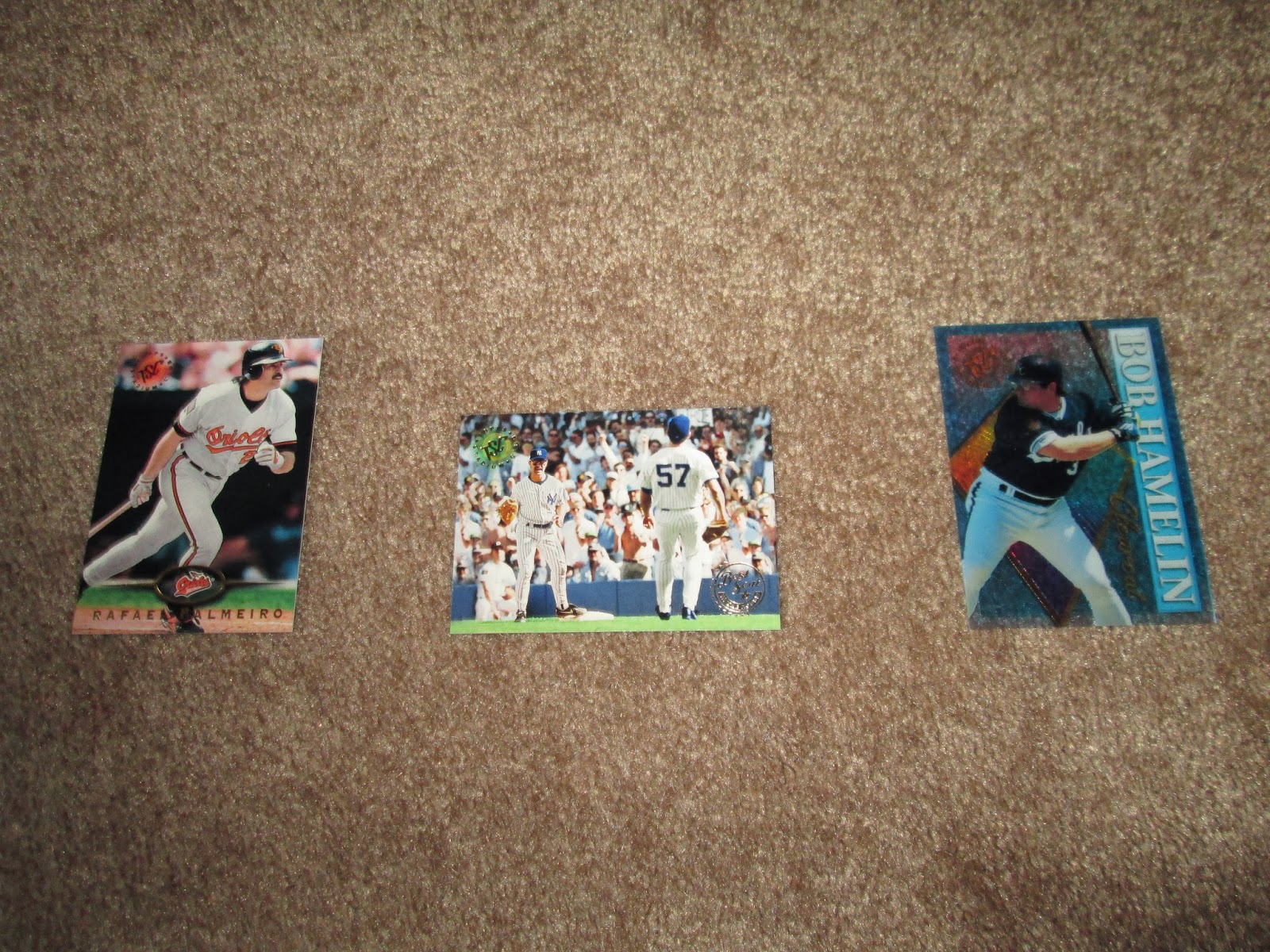 Two non-Hall of Famers are stars here. Rafael Palmeiro was just cut from the ballot, due to his steroid use. Also, Don Mattingly evidently isn't good enough to be a Hall of Famer. But that Best Seat in the House card is pretty cool.
And that Bob Hamelin insert is ALSO a Clear Cut insert, though it's not as cool as the Kirby Puckett. Any Bob Hamelin superfans can take it out of my hands, if they wish. I just find it awesome that that insert was seeded 1 in 24, and I got two in one box, which is nice. Kinda takes the sting out of the whole 'Bob Hamelin' thing. 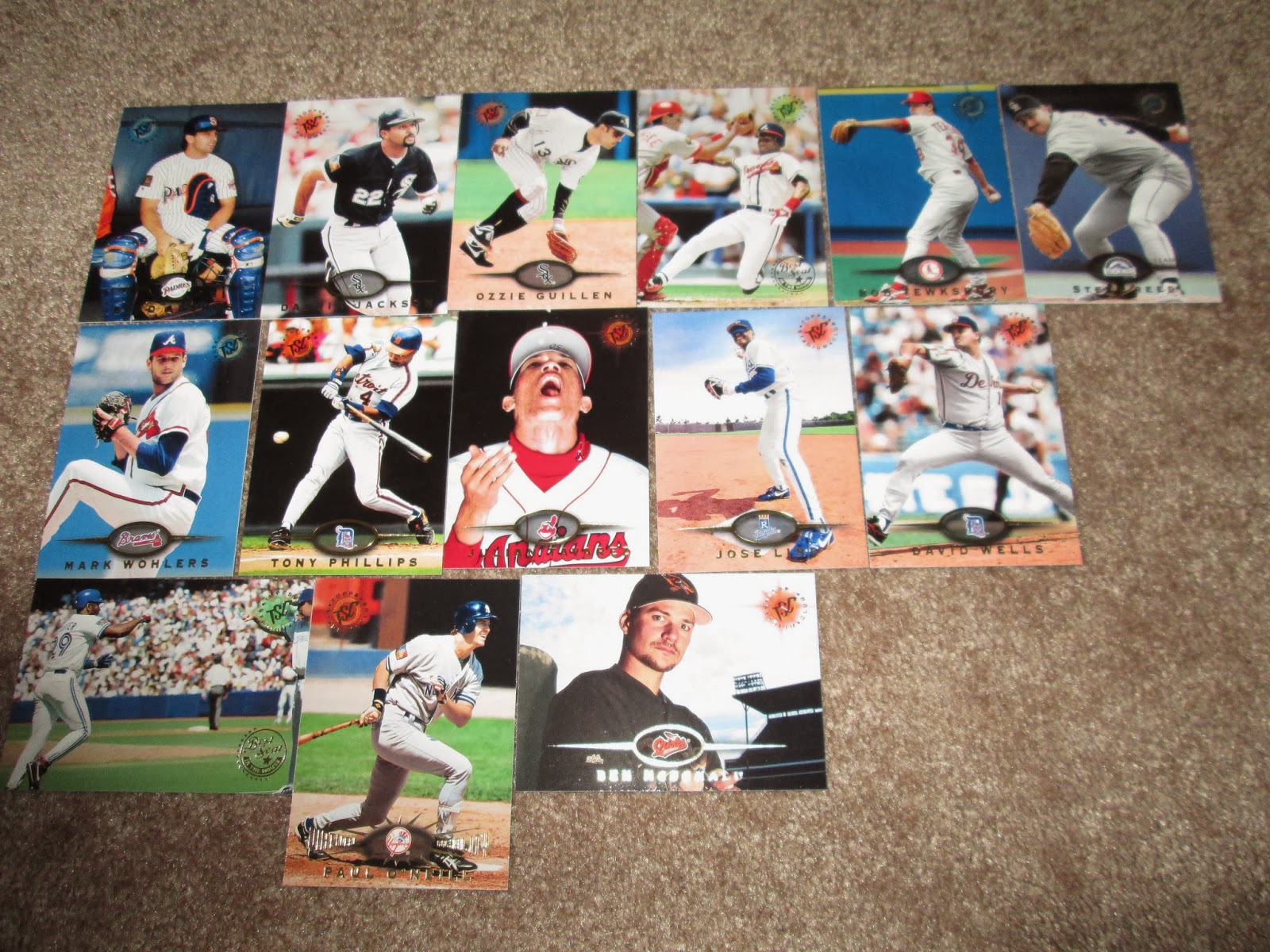 Pack 24- The last pack, containing a lot less doubles than previous packs, and a card of David Wells on the Tigers, which is not hard to come by. 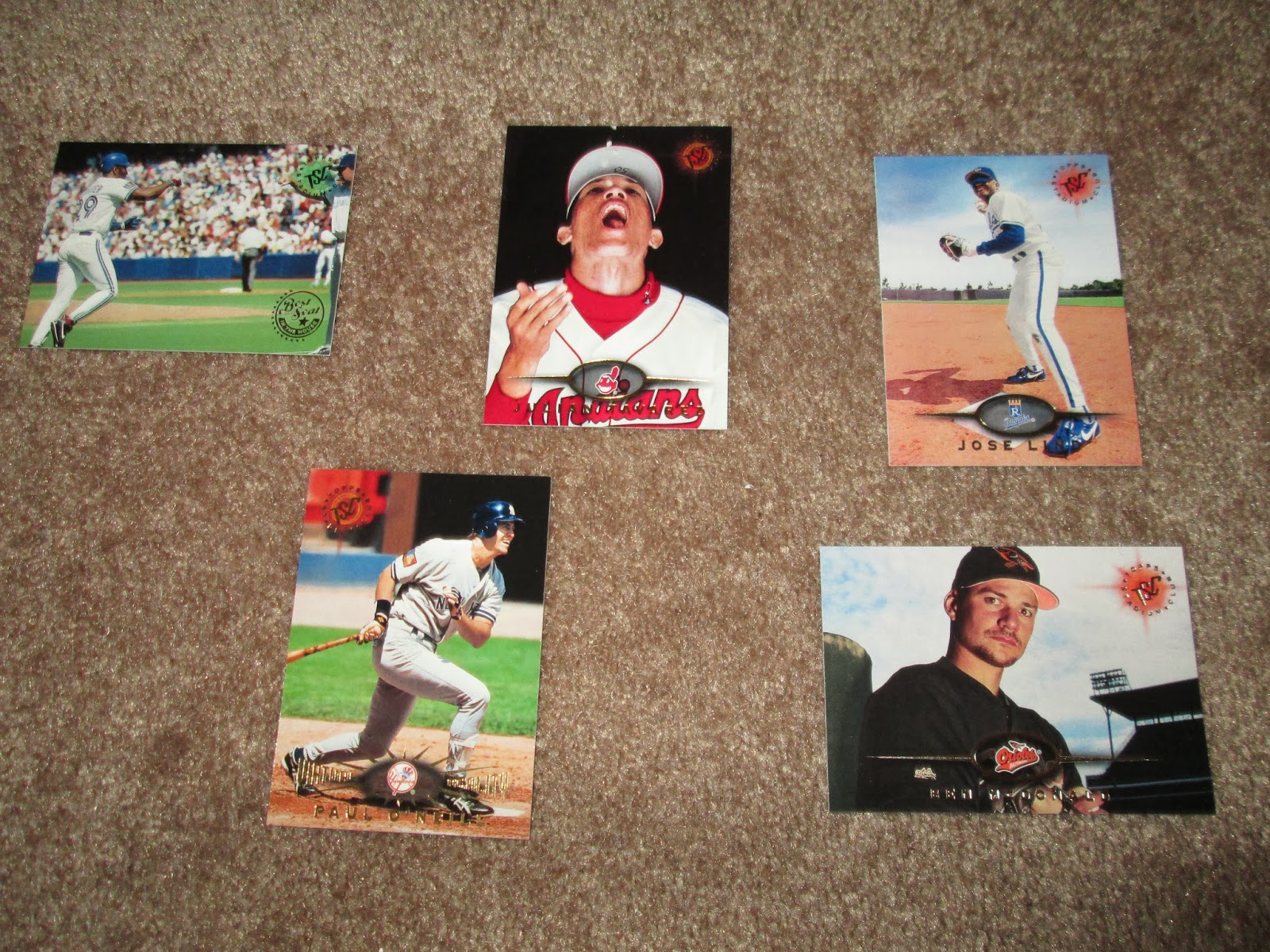 Our five highlights include-
- A Best Seat in the House insert of Joe Carter, two years post homering off Wild Thing.
- An awesome shot of Julian Tavarez throwing peanuts/pistachios/some nuts into his mouth.
- A great, zoomed back shot of Jose Lind.
- Paul 'The Warrior' O'Neill.
- An ultra-serious looking Ben McDonald, back when people still thought he was a good prospect.