Ten more of my favorite customs of the year. I didn't make enough customs to match last year's record of 273, though I did make enough to contend with other years.

On with the countdown... 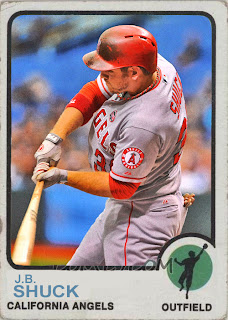 #30- J.B. Shuck, Angels.
J.B. Shuck had a nice rookie season. I don't know if the rest of his career will be anything worthwhile, but this custom is awesome. I love the color on the helmet, the red with the mix of black from the dirt, as well as the background of blue.
﻿ 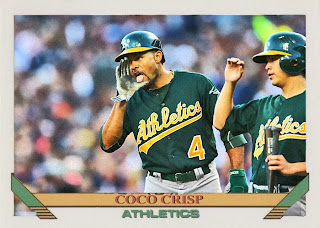 #29- Coco Crisp, Athletics
I used to dismiss Crisp for just being another pretty name, but he's actually become a nice fit for the A's. This custom represents his spirit- always in a joking mood, yet still professional enough about it to have a leadership position. 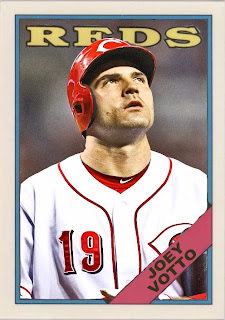 #28- Joey Votto, Reds
This was the year that I tried a few 1988 customs, because I'd been avoiding them for so long, and yet it's not the most difficult design out there. This one benefits from the single headshot, as Votto is watching some ball fly out of there. Or not. I have no idea. 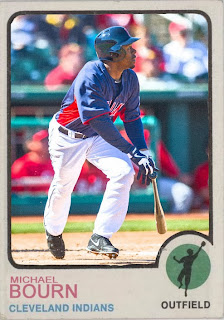 #27- Michael Bourn, Indians
I'll admit that this was a curious pick for the first custom of 2013, but the Indians' photos came out very early, and I snatched them up in a heartbeat, especially if it was a big offseason steal. I love the way the red off his jersey contrasts with the navy blue. It just pops, I guess. 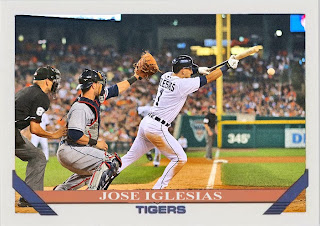 #26- Jose Iglesias, Tigers
I captured a few plate scenes here, just by pulling back the action. This is one of the better ones, of a bunt that went right, and of the entire field reacting. 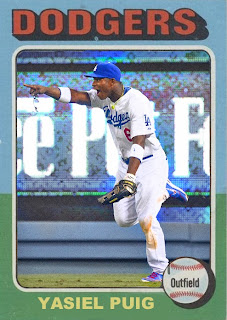 #25- Yasiel Puig, Dodgers
I needed to make a Puig, and I needed to make sure it was worthy of being plastered over every Dodger post for the rest of the year. So, I made it fun, and I made it a nice shot of Puig warming up on his first game. 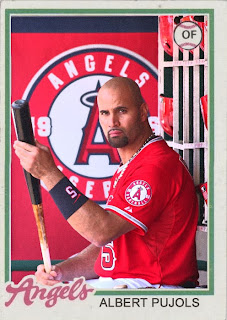 #24- Albert Pujols, Angels.
This is what I like to call the 'Django Unchained' shot. It just reminds me of the first shot of Leonardo DiCaprio in Django Unchained, turning to the camera with a stern look that's almost forming a smile, with a stare that seems like it's rehearsed yet is still gravitated by the overall setting. This is a great custom, one that benefits from the nice shades of Red.
﻿ 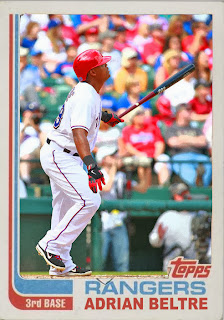 #23- Adrian Beltre, Rangers
Speaking of red, this one has it used so sparingly, yet it illuminates the rest of the shot. It seems like Beltre stands out against the ground, even the outline drawing him closer, with the bat just about to fly out of his hands. Proof that I can make great customs of players I despise. 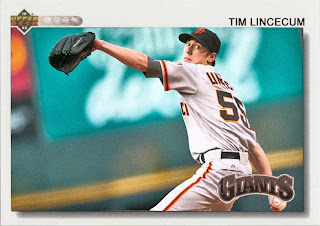 #22- Tim Lincecum, Giants
This one definitely benefitted from a sideways position. You can see the full apex of Lincy's stance, the length of his arms, and the look on his face, contrasted with the advertisement in the background. 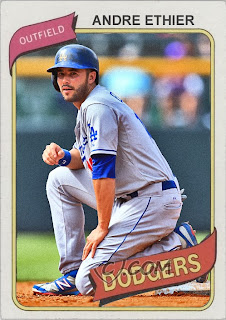 #21- Andre Ethier, Dodgers
Last year's Ethier was my absolute favorite of the year. This one wasn't too bad either, as it gets the grace of Ethier down, even when he's standing still. Great detail on this one.

Tomorrow, I unveil half of the top twenty.
Posted by Jordan at 9:33 PM