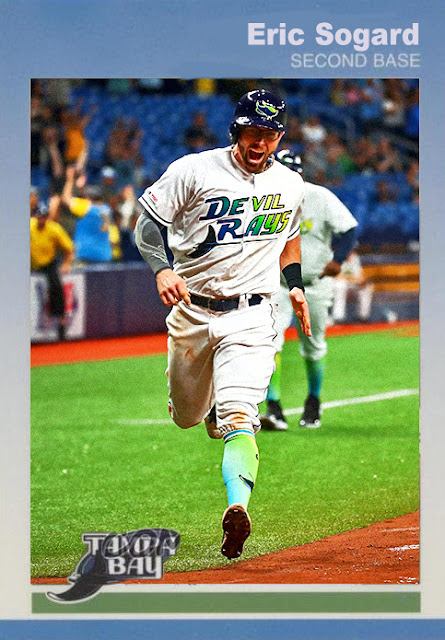 33 years old, adored in Tampa, beloved in Toronto, missed in Oakland. It's gotta be great to be Eric Sogard.

I mean, from a distance his stats may not be fitting of the long-ball tendencies of the rest of the league, but he's hitting .290, has 100 hits, an .810 OPS, and 23 doubles. For a career bench utility guy, this is a pretty nice breakout. He's been aiding the Rays since Brandon Lowe went on the IL, and has been a worthy replacement for the rookie talent, ensuring that the team will have some pretty great overall numbers at 2nd base. Also, having Sogard (and Jesus Aguilar) around adds to the overall appeal of the Rays- guys that may not work on other rosters all banding together in Tampa to make a playoff run.

I mean, I'm glad it's all happening for Sogard now, too. I'm not sure if he'll have another season like this one, or if we'll look back on this in 2 years and go 'heh, remember when we thought he'd make a career out of this'. Honestly, at this stage in his career I don't even think Sogard really cares about career stability with these numbers. He's just happy it's happening, is riding the wave, and hopefully this will keep up for a little while.

Meanwhile, the Rays are right in the thick of the Wild Card race, and are looking to be a recipient of one of those spots. To be honest, I think a playoff run for them isn't out of the question, and they do have that sort of 'anything to win' quality that's resulted in numerous ways to get around injuries to people like Lowe, Tyler Glasnow and Yandy Diaz. The bullpen is arguably stronger than it was last year, with a tangible closer finally arriving, in Emilio Pagan, and the additions of Nick Anderson, Jose de Leon and Anthony Banda bolstering a tight core with guys like Jalen Beeks, Diego Castillo and Chaz Roe.

And look...any team that gets healthy numbers out of Travis d'Arnaud deserves a medal.

Hoping for good things from the Rays in a Wild Card scenario, but...as I am a Yankees fan, I hope they're not TOO good.

Coming Tonight: Perhaps the finest support member of a rotation in history. I'd point to the mid-2000s Marlins, the 2010s Tigers, last year's Braves AND this year's Nats, and he's there, pitching great games out of the spotlight.
Posted by Jordan at 8:49 AM
Labels: Custom Cards, Eric Sogard, Rays