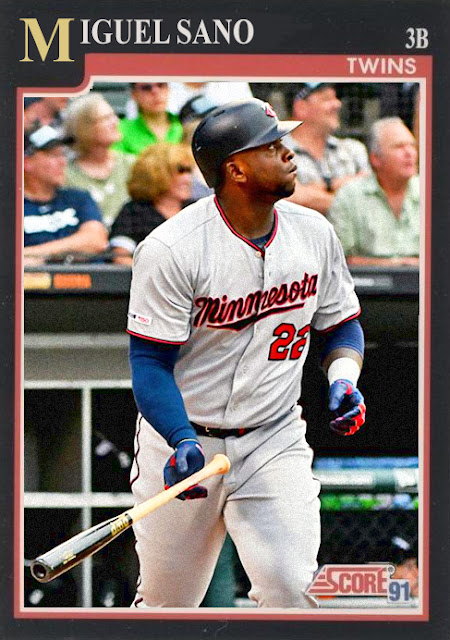 This has gotten very out of hand. The only Twins starter who doesn't have 20+ home runs is Byron Buxton, and not only is he out for the season, but he's a contact hitter. Meanwhile, Kepler and Cruz are chasing 40, Mitch Garver just broke 30, Eddie Rosario and Sano are looking to break 30 within the week, and C.J. Cron and Jonathan Schoop are looking to break 25. Yes, this means that only a few players will finish the season with less than 100 strikeouts in this lineup, but at least nobody's too close to 200 strikeouts, or at the very least Jorge Soler's standard of 161 strikeouts. Though Sano, with 56 less games than him, is still catching up with 138.

Even with this uptick in power, as well as the fun quality of guys like Luis Arraez, Schoop, Willians Astudillo and Marwin Gonzalez getting hero moments, there's still a concern for guys like Sano. Yes, he hits 30 or so homers a year, but A.) has never played more than 116 games in a season, B.) has struck out over 100 times in each season (Marcus Semien has 28 home runs this season, and he only has 93 strikeouts), and C.) has never topped .270 in a season. For a guy the Twins have been banking on for a while, Miguel Sano has only delivered in flashy, broad moments, rather than being a five-tool player that, honestly Byron Buxton is closer to.

For everything Sano can deliver, there are three guys (Eddie Rosario, Max Kepler, Nelson Cruz) doing it even better this year. Which can't be a good thing for him. 26 years old and a guy 12 years older's having the better season? That'd suck.

Also, semi-unrelated, but Nelson Cruz's 40th home run of the year will not only mark his fourth career 40-home-run season, and first since 2016, but it will also mark his 400th home run, which isn't the worst milestone for a career DH.

Anyway. Twins are rolling, the hitting is gonna power them well into the postseason, and Sano needs to have a fuller, more consistent season one of these days.