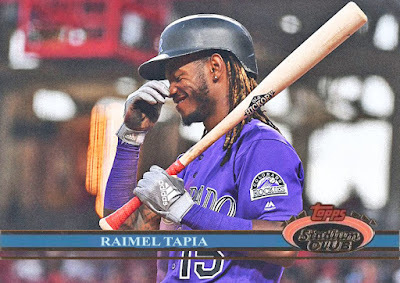 Last year, I unceremoniously predicted that the Colorado Rockies would finish the season in first for the first time in their 25-year existence.

And in 2019, the exact opposite happened. For the first time since 2015, the Rockies are gonna finish the season in last place. They've come...pretty much 360 from that 2015 team, losing pieces like Carlos Gonzalez, Troy Tulowitzki, DJ LeMahieu, Corey Dickerson and Adam Ottavino. And as 2015 was a rebuilding year...2019 kinda was too.

A lot of this year was plugging veterans into spots and waiting for rookies to come up. Daniel Murphy, Ian Desmond, Chi Chi Gonzalez and Yonder Alonso were fine in repertory positions, but the real fun was starting to show towards the end, as Tim Melville, Sam Hilliard and Dom Nunez came up. The former two seem to have a place in next year's team; the latter better hope for stronger 2020 numbers.

And the lack of anchors like LeMahieu and Gonzalez led to a lot of former bench players taking center stage. Some, like Tony Wolters, did well with this promotion. Some, like Raimel Tapia...did very okay. And some, like Antonio Senzatela, who found himself the only competent arm after Jon Gray and German Marquez got injured, did poorly.

There's still hope in the core- Trevor Story, Nolan Arenado, Charlie Blackmon and Ryan McMahon are all strong players, and if they stay together with a better team, they could give the Rox something good in a bit. But...even if they are wrapped up for a while, the rest of the team will need to shape up in order to truly deserve keeping them here.