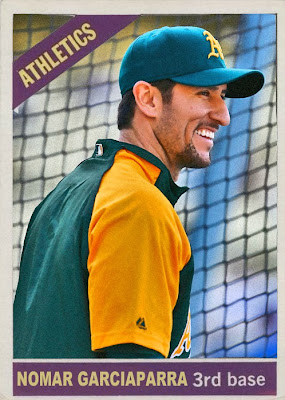 It's a bit infuriating that Topps never gave Nomar Garciaparra a card with the A's, or even a final tribute. It's even more infuriating that he never got a card in 2007 Topps or 2008 Topps either. Because of contract issues (read:bullcrap), his last Topps card was 2006 Update. And even as a Yankee fan, I still grew up knowing that Nomar was one of the biggest stars in the game, and I needed finality. I needed an ending. One of these days I'll customize a 2009 Topps card, but a 2009 custom is good enough.

It's mind boggling how I never made a custom of him in 2009, seeing as how I was still obsessed with his still playing. Either way, he gets a custom now, even though it's unlikely that he'll ever be a Hall of Famer, or remembered anywhere other than Fenway Park or Backyard Baseball.

Still, at least he has a custom.
Posted by Jordan at 9:31 PM
Labels: 2009, A's, Custom Cards, Lost Customs, Nomar Garciaparra