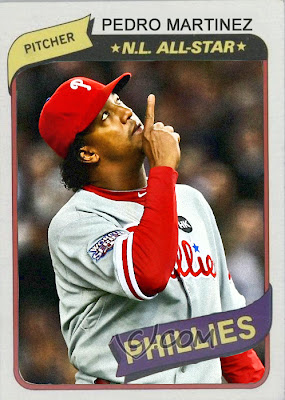 Pedro Martinez, if he plays his cards right, will eventually be done up in bronze next to all those other great Red Sox pitchers in Cooperstown. That decision is a few years away, but I'm optimistic that he'll end up in the Hall, because he deserves it. From 1994 to 2005, he was one of the best pitchers in the major leagues.

I'm proud that he got to end his career, not only with the Philadelphia Phillies, but as a member of a world series squad. And yes, I realize that the man has a ring with another squad, but he got to pitch in Game 2 of the 2009 World Series, as well as Game 6. And I was lucky enough to attend Game 2 (I will never tell you how, only hinting that it involves an ESPN columnist and friend), and see Pedro Martinez pitch live. And he's awesome.

My only regret is that he went out of baseball with a whimper instead of a bang. Nobody re-signed him in 2010, and he never got a 2010 Topps card, which he totally deserved. He just sorta vanished, and turned up as a Red Sox hall of famer or something. And I guess he deserves this custom, more than the other one, which, admittedly, was an early effort.

I'll try to do more of these, but I need to make some, and tomorrow's going to be very busy indeed. So, I'll see what I can do there.
Posted by Jordan at 8:29 PM
Labels: 2009, Custom Cards, Lost Customs, Pedro Martinez, Phillies