First Big Move of the Offseason 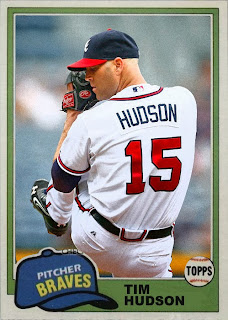 After being a staple of the Braves' rotation for the better part of a decade, Tim Hudson has decided to return to the West Coast, where it all began. Today, he signed a deal to pitch for the Giants next year, not too far from where he made his big break in Oakland.

I always thought of Hudson as a Brave, because when I got in collecting, he was just starting out with them, and as all these other Braves pitchers (Jair Jurrjens, Mike Hampton, Tommy Hanson, Billy Wagner) all left the "current roster pitchers" binder, Hudson stayed. And now, after a good 5 years of securing the primary spot in the Braves section of the binder, I'll have to move him to near the middle of Braves section of the "current player in old uniform" binder. Because that's how my collection works.

Even though he never played for my team, I know what Hudson meant to Braves fans, and I know for a fact that he'll be missed.