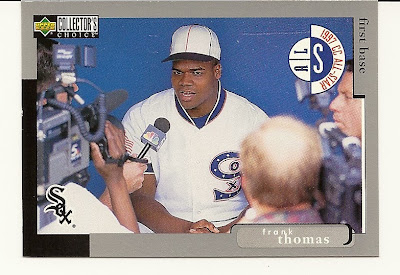 (This is Round Two of Nachos Grande's Blogger Bracket Contest. I have somehow made it to the Final Eight. Hopefully this post would ensure that this silly train keeps on rolling.)

On June 16th, 1997, Frank Thomas, adorned in an old-school White Sox throwback, addressed the crowd. He preceded this by saying he had a very important announcement to make, one that would shake the foundations of the team's already-awful season.

The following is a transcript of said press conference.

FRANK THOMAS: Ladies and Gentlemen, kind, distinguished members of the press...I am here to make the announcement that I feared I would never have to make, as...I love this team, and I will forever be a member of the Chicago White Sox...but as of today, June 16th, 1997, I, Frank Thomas, am announcing my retirement from major league baseball.
(The crowd of reporters are absolutely stunned, and confused)
I'll be open to take any questions.
REPORTER: Yeah, are you absolutely serious??
FRANK THOMAS: Look, I know this is a shocking announcement, but I've come to the decision that, after two decades with the team, I feel that it's time to move on.
REPORTER: Frank, you're 29 years old. Shouldn't that be a bit too soon to retire?
FRANK THOMAS: I realize it may seem like it's the wrong time, but for me, I've done everything I can for the team, and it's just time for me to do something else with my life.
REPORTER: Yeah, what exactly are you going do now that you've...retired...at 29?
FRANK THOMAS: I've been training for the past few months to become a member of the U.S. Synchronized Swimming Team.
(Now several confused reporters leave the press conference, absolutely dumbfounded)
This has been a secret passion of mine for a while, and now I have to go through with it, because now I'll have a lot more free time.
REPORTER: Does it concern you that you have no prior experience in the field of swimming?
FRANK THOMAS: It doesn't concern me. I mean, I've followed synchronized swimming for so many years, that I feel like it's about time for me to step into the game. I mean, the way I see it, it's like...it's like an inchworm. An inchworm that has spent its whole life being an inchworm, biding its time. And all its life, this inchworm has wanted to be a water buffalo.
(now more reporters leave, having no idea what the hell is going on)
And right now, I'm the inchworm, and I wanna go ahead and start being a water buffalo. And I don't care how good at being an inchworm I am. I don't care what anyone says. I'm just gonna do the water buffalo thing for a while, see how that turns out.
REPORTER: Frank, isn't this a bit misguided seeing as you'll be a 240 lb. synchronized swimmer?
FRANK THOMAS: You know, this hadn't occurred to me until last week. My shrink brought it up. He also asked me what the hell I was thinking, and being a psychiatrist, he should kinda know that already. But yeah, I know I'll be one of the largest synchronized swimmers out there, but I really don't care. Besides, once I'm out of Comiskey, I'll probably drop about 20 pounds.
REPORTER: Should this be seen as a betrayal to the South Side?
FRANK THOMAS: Certainly not. As much as I love baseball, I feel like I want to do something risky and ridiculous that I've never tried more than I want to do something people pay me to be amazing at.
(He realizes what he just said, ponders it, but then nods and stands by it).
REPORTER: Does this move have anything to do with the White Sox' awful start this year?
FRANK THOMAS: No, not necessarily. It has nothing to do with the fact that the Cubs just swamped us, or the fact that our 2nd-best hitter is Harold Baines. It's just...I feel like they can finish this without me. Terry Bevington's got it all under control.
REPORTER: And what of the news that Bevington just signed on to be the Coach for the U.S. Synchronized Swimming team?
FRANK THOMAS: (Stunned silence) Uhhh...he did that? Well, then....I take back everything I just said. Go White Sox. Don't do drugs, kids.
(Thomas darts offstage quickly).
(Suddenly, White Sox Coach Terry Bevington comes into the press conference)
TERRY BEVINGTON: Okay, seriously, guys. WHY'D YOU HAVE TO TELL HIM? That was gonna be a surprise gift! You guys are no fun!
(he sighs)
I guess I have to go coach people I've never worked in a sport I've never coached before now....and this is all your fault.
FRANK THOMAS: (from offscreen) YEAH, HOW ABOUT NO?!?