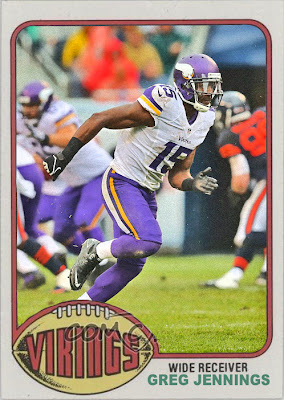 I thought, seeing as the Vikings were crap for most of this season, that I'd never get to post this card. However, they squeaked past the Redskins a few days ago, and now I get to post a card of a former Packer that betrayed me.

Believe me, there have been worse. Ahman Green went and became one of the stars of a barren Texans lineup. Bubba Franks stranded himself in Cleveland. Worst of all, Darren Sharper found his way onto a Super Bowl winning roster, albeit a year before the Packers made it.

But there's something about Jennings' jumping of the ship that stings, slightly. Maybe it was how good he was with the Packers. Maybe it was how he got injured halfway through last season. Maybe it was the fact that he's still doing alright this season, given the circumstances.

Whatever the case, I'll still remember the days of his Packers years, and his time when I didn't hate him as much.