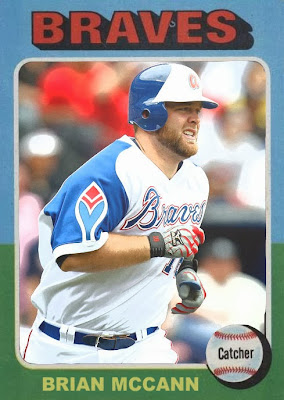 The number one problem after Jorge Posada left the Bronx was that we needed a reliable, trusted catcher that didn't end up stinking up the joint in the end. Francisco Cervelli, Russell Martin, Austin Romine, Chris Stewart- all underperformed, for the most part. So going into 2014, we all knew that the catching situation was the biggest problem.

In terms of a deal, this was a very good one. McCann's a consistent catcher, with some pretty huge seasons under his belt, and he only waned slightly in 2013, with an injury bringing him down. But, since the Braves have Evan Gattis to take over now, McCann will be perfect for stepping into the behind-the-plate spot in Yankee Stadium.

Personally, I think the deal is nice, however I'm a bit skeptical, as I don't want this to end up like Youkilis, and he won't hit or perform at all. I want him to have a big year in 2014, and I want him to totally reclaim the momentum he had in 2011, and the years before then.

Still, I'm very satisfied. But that's just one problem out of many, making this writer very satisfied that it's only November.
Posted by Jordan at 7:03 PM
Labels: Braves, Brian McCann, Yankees