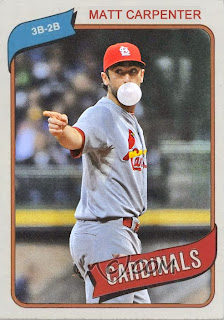 Today's a pretty big one.

Today, this veteran blogger turns eighteen years old. I'm now free to do basically whatever I want on my own terms, and I'm celebrating by doing something I've done on my own terms for the past 5 years...writing a blog post.

The reason Matt Carpenter is shown above is because he was born today as well. Which is horrifying, considering the fact that I despise his team, and everything about him. He's one of the few notable players to share a birthday with me. Thankfully, there's also Lefty Gomez, a Yankee Hall of Famer, but the kids don't know him. They know Matt Carpenter, because he almost won a World Series this year.

I mean, at least Nick from Dime Boxes has somebody recent like Josh Reddick, who they can boast about, and say 'that's actually pretty cool', but Matt Carpenter is not as fun as Josh Reddick. Plus, Matt Carpenter doesn't even have a huge beard. And I don't want him to grow one either.

All I ask is that some new rookie come along with a November 26th birthday, amaze at their position, astound in every category, maybe even play for a team I tolerate, and make me proud to be born today. Really, nobody else was born on November 26th, save for Charles Schulz, Tina Turner and Robert Goulet. I just need somebody big.

By the way, before you ask, no, I didn't get any cards today. However, I'm seeing my extended family in two days, and one uncle and particular might have something up his sleeve.