What happens when a villain switches lairs 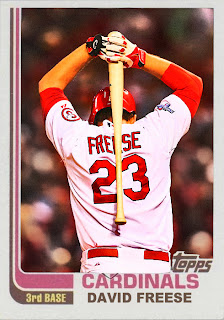 I don't know if you've heard, but I hate David Freese. His presence in St. Louis ALONE made me root for the Red Sox this year.

David Freese is the single embodiment of scum and villainy, and he represents everything I hate about the Cardinals.

So what happens when he gets traded to the Angels?

I mean, this is kind of an odd move for Anaheim, as I never would have expected Freese ending up there, however half their team consists of those kind of moves. Freese will get along splendidly with Pujols, Hanson and Hamilton.

But, I'll be honest that I really don't know what to think. Like, half of what made Freese so awful for me is because he did all of those things while on the Cardinals. The other half was just him hitting homers at inopportune times, and being obnoxious about it. And now he's just not on the Cardinals. Even worse, it's a team I'm indifferent about, the Angels.

So...I'm gonna wait until he actually plays in an Angels uniform to really form an opinion. If he's the same old Freese, then he's still #1 on the list of least favorite players. If he actually manages to become a respectable, non-awful ballplayer...Cody Ross, you're back on top.

Posted by Jordan at 7:17 PM
Labels: Angels, Cardinals, David Freese, in which Jordan does not know what to think