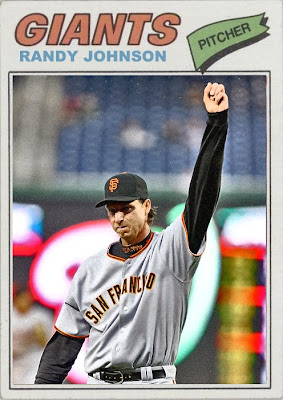 When I started customizing, it was 2009, and I was just doing the players that were hot, that were the stories of that day. I didn't take into account all the people that would be retired or with another team within the next few years, so there were a lot of customs I never made, yet wanted to years after. Four years later, I'm finally doing the ones I missed from 2009, using photos from 2009. So, I'm calling these the 'Lost Customs', because I really needed something to do during the offseason.

Randy Johnson played his last season in 2009, and while his numbers weren't spectacular, his highest achievement of the year was FINALLY hitting 300 strikeouts, and going out with a milestone. Johnson's name will come up for the Hall of Fame ballot in 2015. There is no question, he's getting in.

I'll try and do these consistently, though I don't know how often. Expect a veteran pitcher who ended his career with the Phillies.
Posted by Jordan at 9:47 PM