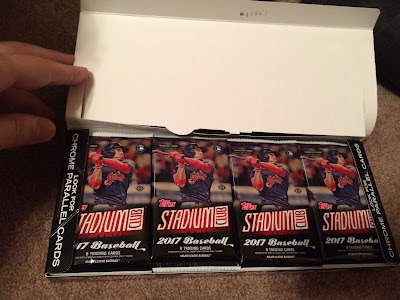 Last night I posted the first part of this box of 2017 Stadium Club. Like usual, I adore the photography, design, ripping experience. Like usual, I'm pretty underwhelmed by the hits, and there's probably some Cardinals fan somewhere rolling his eyes at pulling an Aaron Judge autograph or something.

Tonight, you'll see part two. The hits are gone, so it's all base and inserts from here on out. It's Stadium Club, so that's kinda what we're all here for. 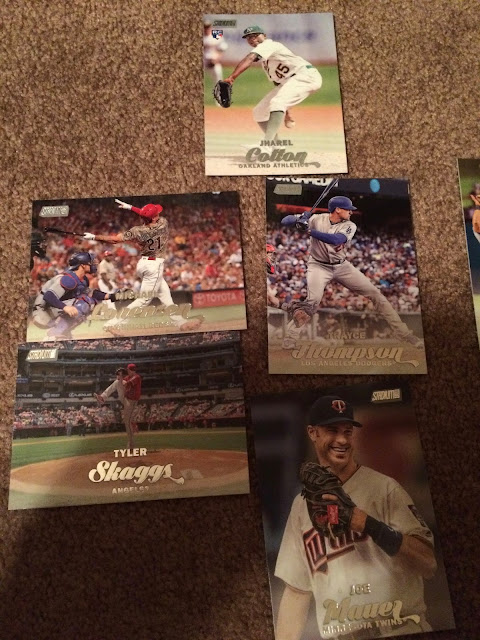 Pack 9- The mixed bag portion of the eight-card pack. Two cards, the Skaggs and Mauer, that I've already pulled, a pitcher that's barely even relevant this year, a sophomore that's barely played this year, and a rookie that's sort of done alright so far. 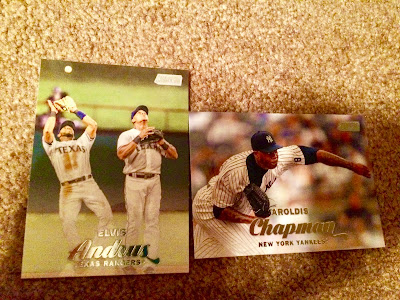 These base cards are a bit better- Elvis Andrus' card has a cameo from third-baseman and pop-up rival Adrian Beltre.
Meanwhile, Aroldis Chapman is pictured as a New York Yankee again and I'm so happy. 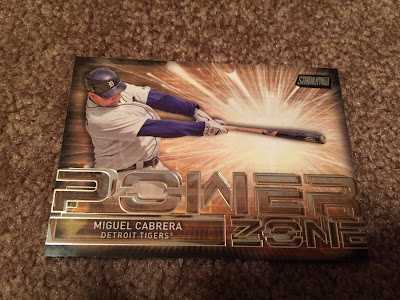 And, a rather awesome insert, too. Power Zone was a great set from the late 90s renditions of SC, and this year's version is a rather fitting homage to the original one. Plus, unlike the 90s Power Zones, this set has subjects that haven't taken steroids, plus ones I adore like Miguel Cabrera. 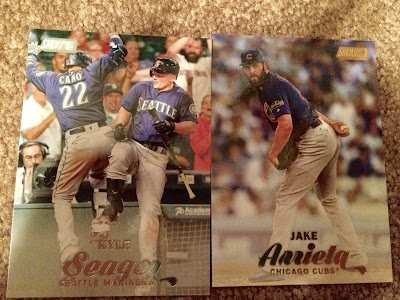 Pack 10-
Slumping heroes. At least Seager and Cano are enjoying their fun little leg thing there.
And, of course, Arrieta looks intimidating as hell on that mound. 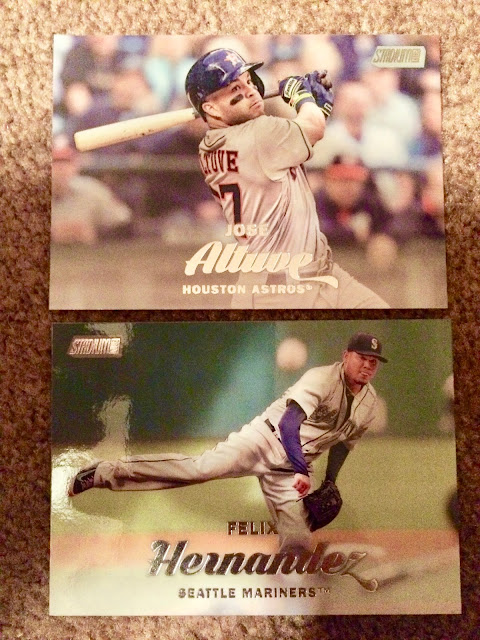 AL West heroes. Nothing insanely special about these two cards, but the way they're cropped and zoomed is a ton more interesting than most Topps flagship ones. 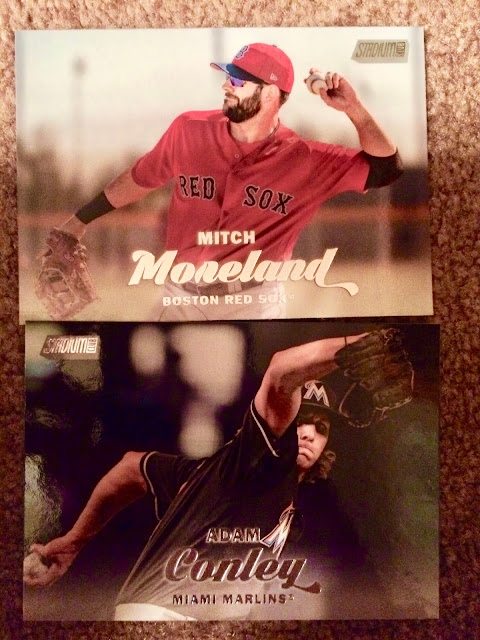 Mitch Moreland seems happy to be in a Sox uniform, and the Spring Training setting is a beautiful one. Adam Conley's card is the antithesis- darkness, blackness instead of light. 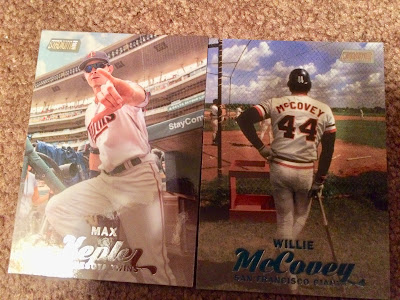 These two were my favorites. The angle of this Max Kepler card made this one cool, especially the look on his face, and the distance from his 'devil horns' sign to the camera. Just really friggin' cool.
Plus, you get one of the most poignant shots in a Topps product in a very long time, of Willie McCovey. Absolutely gorgeous. 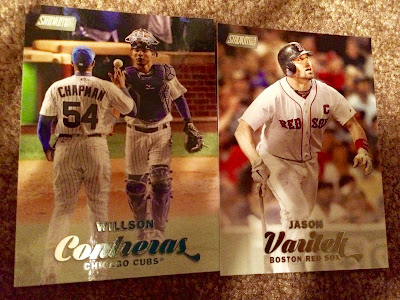 Pack 11- Pair of catchers. Contreras gets a nice postseason card with Aroldis Chapman, and Jason Varitek...while, like Derrek Lee, is an odder inclusion, is a bit more welcome thanks to his Sox captain status. 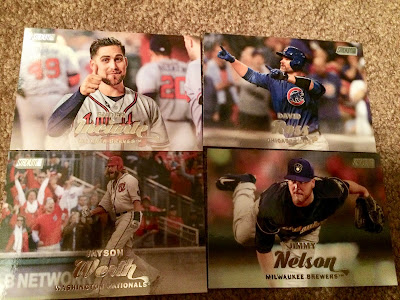 A quartet of sideways shots. My favorite of the bunch is probably Grandpa Rossy, but the Werth belongs to the Stadium Club school of making Jayson Werth look absolutely awesome on cards.
Inciarte's photo I used in a custom last year. How about that. 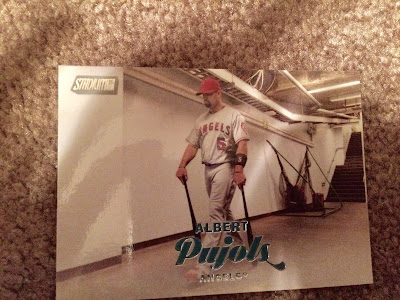 Absolutely gorgeous backstage shot of Albert Pujols. Kinda similar to a CJ Cron shot they used last year, though this one's a ton more dramatic. It's Albert Pujols, so the mystique comes with it. 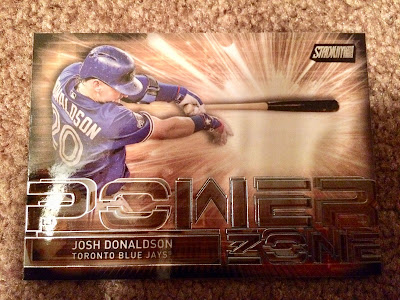 Plus, here's another really cool Power Zone insert of Josh Donaldson. If you're counting, I've pulled two inserts of Blue Jays, and an autograph of a Cardinal. I also despise both teams, if you're not keeping score of that. 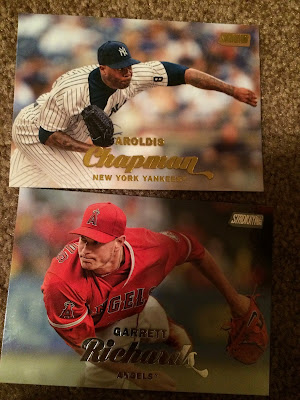 Pack 12-
A gold dupe of a Yankee, and a base card of a guy who's been injured for two seasons. 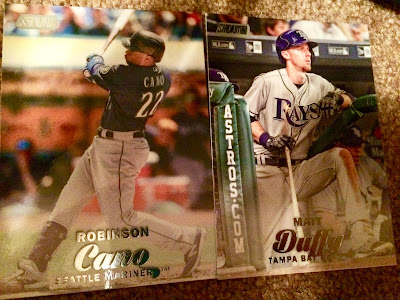 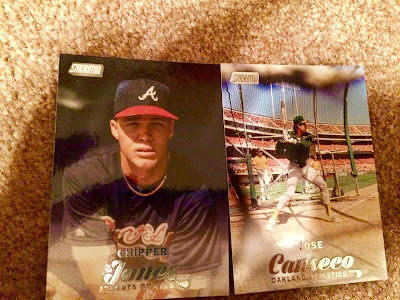 Retired Stars! CHIPPAH looks pretty great, and young, in this shot. The Jose Canseco card is from the perspective of either a very frightened reporter or, you know, Trevor Hoffman 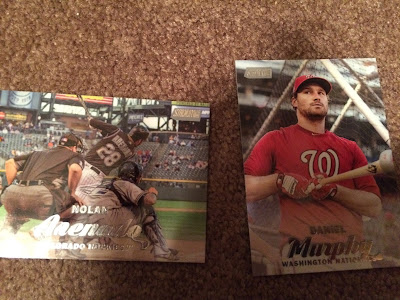 All star starters. Arenado's is a terrific behind the plate shot, and Murph's is a nice BP shot. 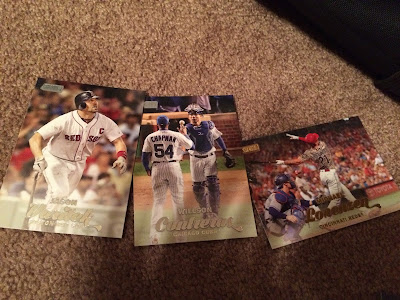 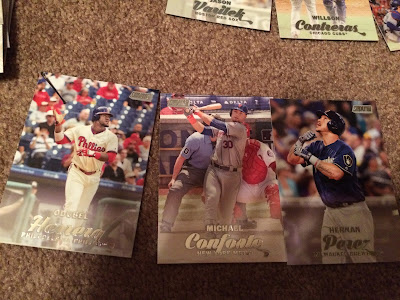 This is better. Odubel Herrera's is a picture of one of the few offensive highlights in Philadelphia in 2016, while Michael Conforto's is a shot of one of the few non-strikeouts of HIS 2016 season. Hernan Perez, like this year, is just there for moral support. 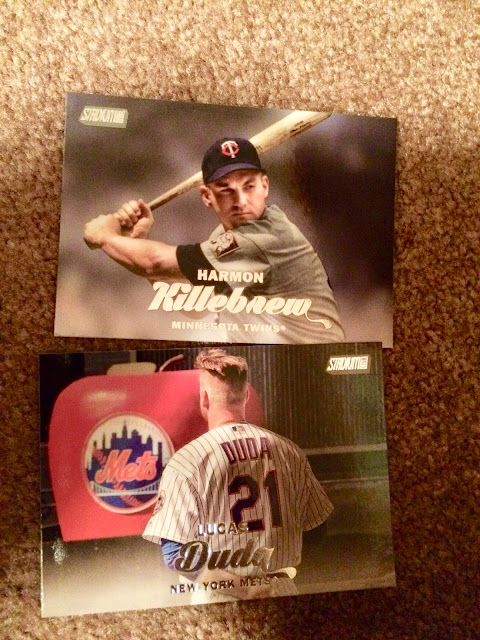 Killebrew's is pretty damned cool, and Duda's is very dramatic, made even better by the behind-the-back aspect. 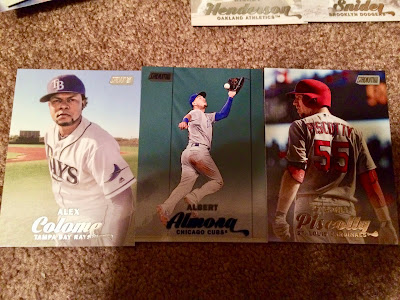 Pack 14- A trio of 'meh'. Colome's is a good enough posed shot, Almora's is a standard outfield shot, and Piscotty...is a Cardinal.

A moment with some legends. I love the late-70s-early-80s A's uniform on Rickey, and I love the grainy B/W Duke. Making his a Brooklyn card rather than an LA one is just as classy. 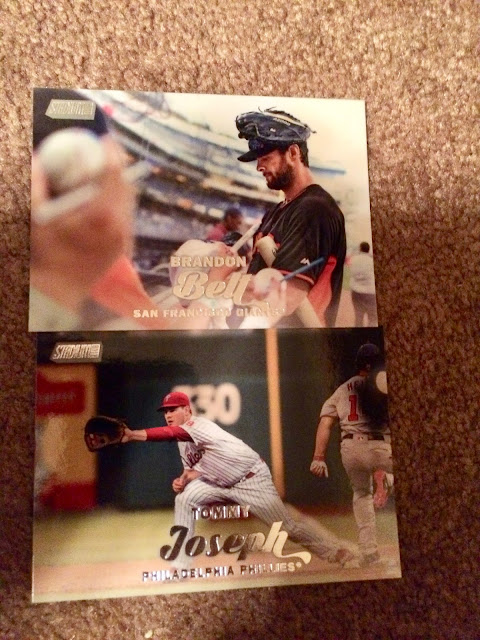 Belt's auto shot is pretty damned cool, with the helmet-hat and everything. Plus, I'm glad Tommy Joseph finally got a card in Stadium Club. Way to go! 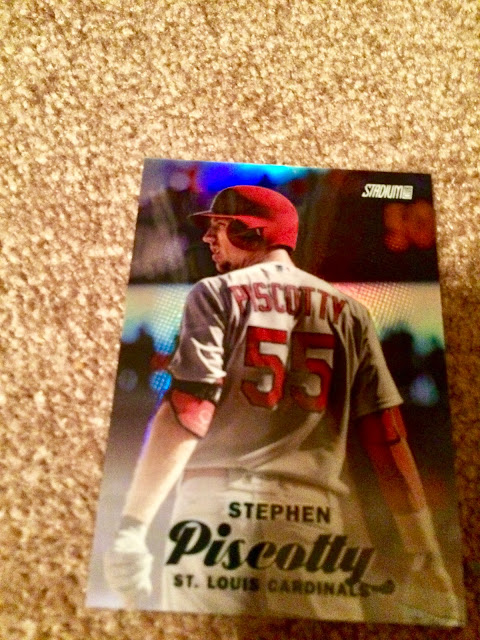 THIS...is a chrome refractor, seeded every one in four BOXES. The fact that I pulled this is pretty amazing, as it's a rare hit, and it comes off pretty cool in this photo. 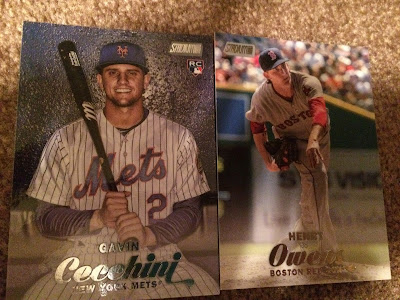 Pack 15- A pair of rookie/prospect types that...really haven't factored into this season. 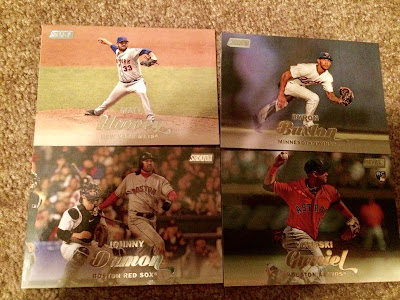 Lots of cool stuff here. I love how far they've zoomed back Harvey's card, I love the angle on Buxton, I appreciate the inclusion of Johnny Damon (and understand why he's wearing that wretched uniform), and love the lighting on that orange uniform of Yuli Gurriel's. Cool stuff all around. 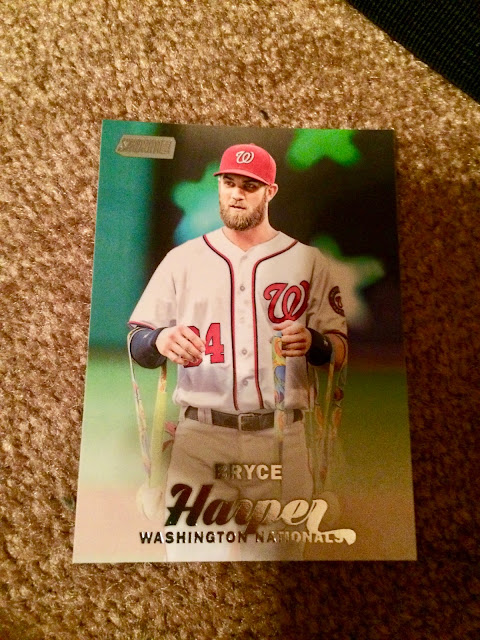 (That was sarcasm, Sheldon). 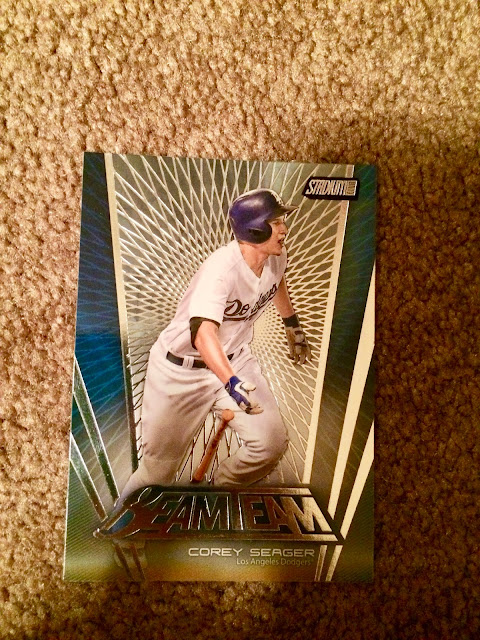 Ooooh, as if this set didn't already have my attention, they give a REALLY, REALLY, REALLY COOL BEAM TEAM DESIGN. Like, CHRIST this thing is awesome. Plus, it's an insert of Corey Seager, who I have a ton of respect for, and who's having another great season. 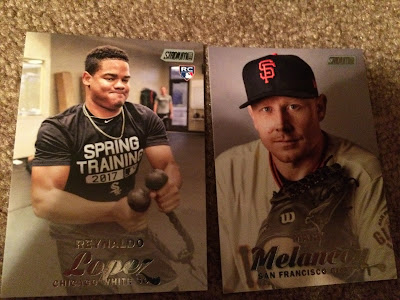 Pack 16-
That is a fantastic shot of Reynaldo Lopez. Absolutely awesome.
Mark Melancon's is kinda commonplace, made even weaker by his non-presence in San Fran this year. 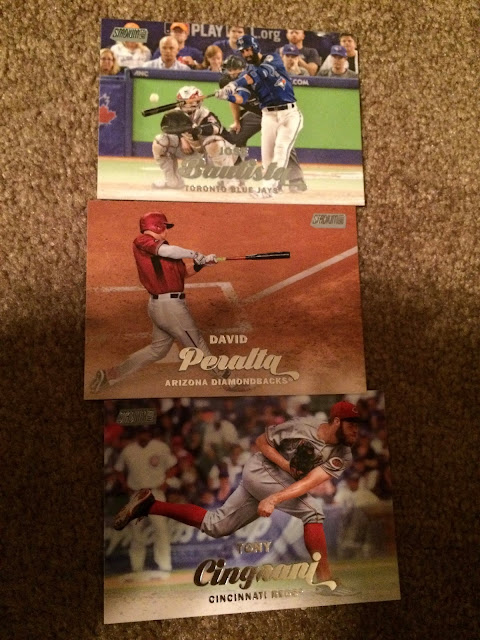 David Peralta's shot is the best of the three, and probably the more relevant player, too. 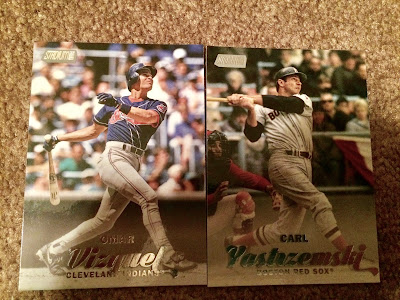 Two retired legends. Topps keeps pumping up Omar Vizquel in these products, which...is fine I guess.
They can pump up Yaz as much as they'd like, though. The man was a legend in Boston, and I do have some respect for him, even as a Yankee fan. 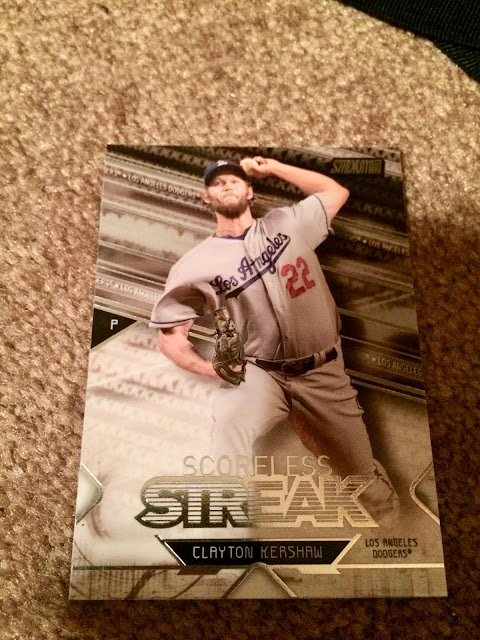 We end this really nice box with a Scoreless Streak insert of the best pitcher in baseball. So I've got that going for me, which is nice.

So...that's 2017 Stadium Club. This set keeps getting better and better, though I would put a few aspects of the 2016 set above this one. The photography, filtering and inserts are still top notch, and this is still a Grade-A, incredibly original set from a company whose originality has been lacking lately.
Posted by Jordan at 8:47 PM
Labels: 2017, box break, Product Review, Stadium Club, Topps