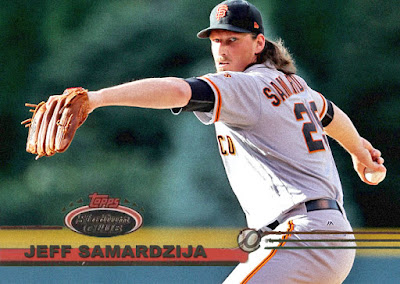 I did not plan to post a card of Jeff Samardzija on Shark Week. It just turned out that way. That's just an insane coincidence.

I don't know how it happened, but everything just fell apart for the Giants, a team that won a World Series only 3 years ago. The base of the team is practically the same, but a lot of the beats that made a winning team aren't really working anymore. The core's aging, the replacements aren't up to the task, and people are getting to them. Jeff Samardzija, as per usual, is throwing a ton of strikeouts, but still giving up a ton of runs.

Even worse, the Dodgers, Rockies and D-Backs are so powerful this year that everything the Giants do looks effete by comparison. Even if Buster Posey's having a nice season, it's nothing compared to what Cody Bellinger or Charlie Blackmon is doing. Plus, now the Giants are thinking of giving up some of their lighter players at the deadline, which is sad but necessary.

Not a great deal to say about the Giants. You gotta hope things get better, though.

Coming Tomorrow- Last year he was one of the best in the league. This year he's hoping a down season doesn't wreck his career.
Posted by Jordan at 10:17 PM
Labels: Custom Cards, Giants, Jeff Samardzija