The Collector Finally Gets His Due 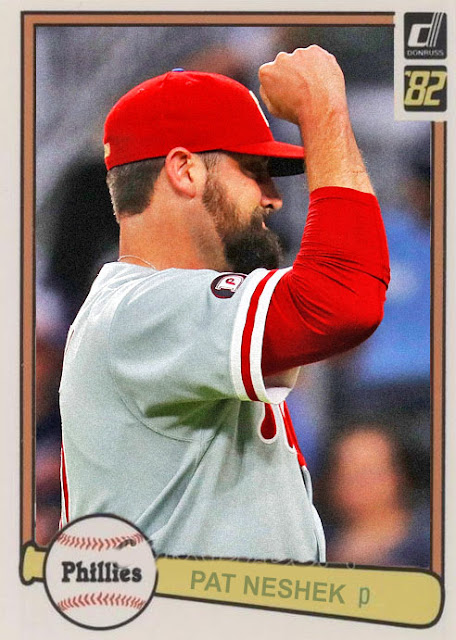 Pat Neshek's one of the most legendary card-collectors in baseball right now, and I didn't get to make a custom card of him until he joined my hometown team. Man, if he actually knew about my blog he'd be really, really pissed.

I actually do have a ton of respect for Neshek. The guy'd done a ton of work in odd places, making an All-Star team as a Cardinal but still getting all of Minneapolis to applaud, and being among the unsung heroes of the 2012-2013 Athletics. He's been one of the most unlikely heroes of baseball, and the fact that he's made two All Star Games is a great sign for baseball, in that it doesn't always have to favor overpaid stars.

Neshek's been one of the best players on the Phillies, and one of the insanely bright spots on one of the worst bullpens in baseball. The guy's got a low era, a ton of strikeouts, and already has a fan following in Philly, which proves that even doing well for a few months can get you one there.

I imagine Neshek's probably gonna get traded in a week or so, because...I mean, he's one of the few great things about the worst team in baseball, and someone's gonna have to want something of his. I hope he's traded somewhere really nice (like maybe back to Houston), and I hope his star can stay semi-high for a little while.

(Part of me thinks he's gonna get a kick out of having a custom. Just a part of me, though.)

Coming Tomorrow- A hard-hitting rookie for the well-faring defending AL champs.
Posted by Jordan at 9:57 AM