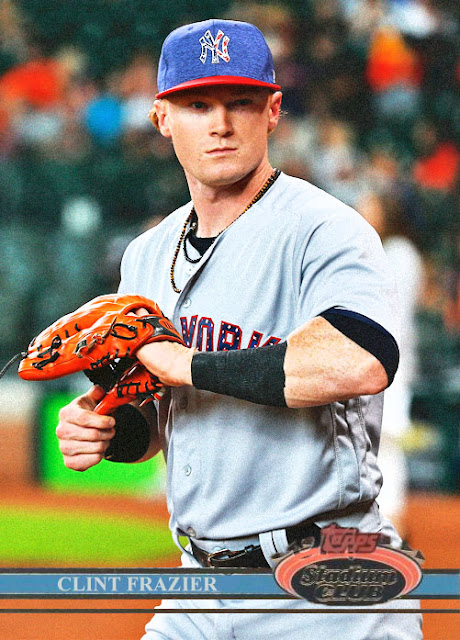 Yes, I understand who's playing third base for my team right now, but I'd like to talk about one of the other rookie Yankees who's doing really well this year. Yes, someone other than Aaron Judge and Todd Frazier.

This is a guy that was brewing in the Indians' farm system for a year or so, and wound up in the Bronx thanks to a trade for Andrew Miller. People were making a stir about the fact that Clint would have to cut his trademark mullety-locks in order to become a Yankee, and I was just excited to see exactly what he'd do in the Bronx, as people were saying he'd be close to ready.

Clint Frazier, in his 13 games since coming up, has had 14 hits, 3 home runs and 8 RBIs. He's on track to have the kind of second half of the season that made Gary Sanchez a big deal last year. Plus, he's one of those characters that you want to have on your team. This is a team that's been through several characters, lots of spirit, an actual Danish knight, and an actual giant, and now Clint is adding one more character to the fold. How could you not like a team with this much fun people?

Yes, the Yanks are currently in third place, behind the building-while-we-weren't-looking Rays, and the still-in-first-place Red Sox, but they seem to be on the upswing, and with the addition of Todd Frazier and David Robertson (and possibly a certain Oakland starter), they might be building to become surprisingly amazing down the stretch.

Coming Tonight: Home-run hitter for a middling NL East team.
Posted by Jordan at 9:38 AM