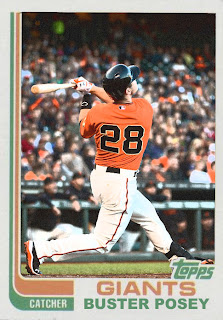 There is a thing that most fans can't negate
Regarding one position's downward cruise
It's that those working days behind the plate
Succumb to every blister, bump and bruise
Most spend their rookie year proclaimed as champs
High accolades and garments- all is well
Until a summer's achievements turn damp
And sophomore year is spent on the DL
The cycle has been going on for years
With catchers getting hit and missing out
Mauer, Posey, McCann- all jumpstart fears
Of a return to glory there is doubt
The sad thing is that many catchers find
After their summer, winter right behind

I really hope Buster Posey returns to his 2010 numbers, and I really hope that rules are changes so that catchers such as Posey and Mauer can keep playing catcher for a while.

Coming Tomorrow- Something much less poetic. A long tenured pitcher going into the final stretch of his career with Cincinnati.

(By the way, I might FINALLY be getting some cards tomorrow or Sunday. Archives and Series 2 have been screaming at me. And besides, in two weeks is the Philly Show.)
Posted by Jordan at 9:46 PM