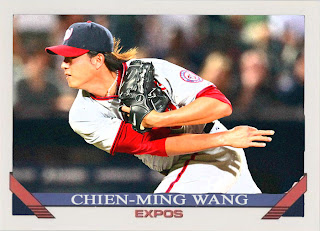 Here in America, the man above doesn't get too much respect. And that's a shame.

In his native Taiwan, he's hailed as a pitching marvel, as one of baseball's greats. How Japan treated Ichiro? Yeah, that's miniscule compared to how Taiwan treats Wang. He's a king over there. Everybody loves him. My dentist, who hails from Taiwan, is a huge Chien-Ming Wang fan. And when he was with the Yankees, this was a thrilling prospect. People from Taiwan were watching Yankee games just to see this guy pitch. If a former MLB player were playing for the Yoimuri Giants, we wouldn't tune in to see him play. Unless it was Goose Gossage.

The saddest part came in 2010, the one season where he was injured. Instead of Wang, Hong-Chi Kuo was the big star, becoming the first Taiwanese player ever to pitch an All Star Game. However, nobody really cared about him. Only Wang really mattered.

Last year, when Wang came back, my dentist was thrilled. And, so was I. I had become a fan of Chien-Ming Wang, even after he'd left the Bronx. He pitched a pretty good season for the Nationals, and his comeback was taken into a account. Now he's pitching well, and his team is leading the division.

There may be a few other Taiwanese pitchers around, including the one in Baltimore, but only one matters, and it's Chien-Ming Wang.

Coming Tomorrow- Speaking of division surprises, the closer for the AL Central's wildest team is holding his own, and is currently the best closer in the league.
Posted by Jordan at 2:58 PM