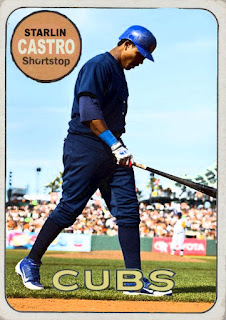 First of all, look at that card.

Second of all, I must address the decline of the Chicago Cubs this season. They're circling last, only propelled by the fact that they at least have redeeming qualities, unlike a certain team leaving the division this year.

Starlin Castro is their only real hope. He's young, he can hit, he's good at the position, and when he's on his game he's really good. He's not getting much attention, mainly because his team isn't. Hopefully the team will get better, or he'll get traded to a team that truly respects him.

Coming Tomorrow- The ace of a team that I've wanted to make a comeback for several years now.
Posted by Jordan at 9:10 PM