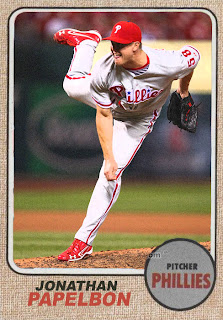 Do you have any idea how infuriating it was when this guy kneeled down and started yelling at the sky right after he finished off the Rockies in the 2007 World Series?

Back in the 2000's, Papelbon was pretty high on my hate list, mainly for being the closer for my least favorite team. And then, in the last few years, he began declining, and sucking for them. This may have been fun to watch, but it's hard to hate someone who can't play baseball (insert JD Drew joke here). So he slowly crept off the list, and his spot is currently held by Cody Ross. I wanna punch that guy in every orfice of his body.

So then, right after he leaves my gaze of hateness, what does Papelbon do? Sign with my 2nd favorite team, of course. And he's been doing relatively well for Philly. Sure, he's not a veteran pitcher who can't even get one win, but he's a champ nonetheless. Hoping he'll do better than Brad, or Bad, Lidge.

Coming Tonight- Possibly the greatest Taiwanese ballplayer of all time. And he's one of my favorite current non-Yankees.
Posted by Jordan at 8:40 AM