Topps Cards That Should Have Been: 2009 Topps Bartolo Colon 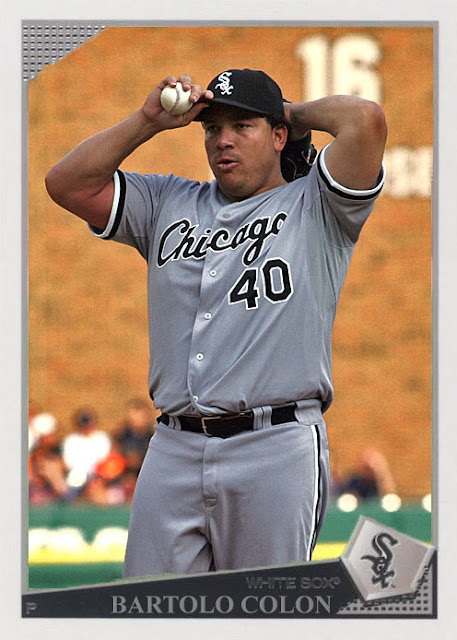 In another universe, this would have been Bartolo Colon's sunset card.

After a strong career, a Cy Young, and a few injury plagued seasons, Colon returned to Chicago as a starter in 2009, pitched 12 games, and came up with a 4.19 ERA, a 3-6 record, and 38 strikeouts. Not bad, but for a team with great performances from Mark Buehrle, Jake Peavy and John Danks that year, it wasn't enough.

While Topps does make a card of Colon as a White Sock in its Heritage High Number series, which should benefit from being released later in the year this year, it doesn't make a flagship release of him. The 2008 Update card of Colon in Boston evidently was enough for them.

As Colon spent his 2010 season in independent leagues, trying to make it back...there was an indication that Colon's 2009 season may have been his final one. So Topps not cooking something up for 2010 Topps is also suspect. Colon's eventual return with New York in 2011 must have felt very unlikely, and if he doesn't come back for a minor league deal with the Yanks, Colon never achieves his late-career appreciation with the Mets.

This Sox card could have marked the end of Colon's initial run in the majors. And I wish it existed.

Labels: 2009, Bartolo Colon, Custom Cards, Topps Cards That Should Have Been, White Sox