Topps Cards That Should Have Been: 2008 Midyear Deals 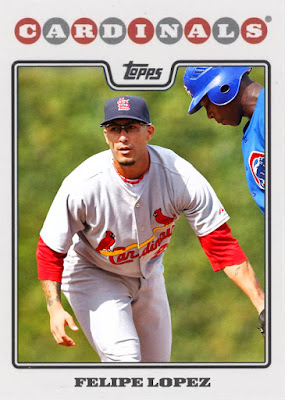 The 2008 Trade Deadline was relatively well-documented in 2008 Updates and Highlights. The big guns received cards, like Manny Ramirez in LA, Ivan Rodriguez in New York, Ken Griffey Jr. in Chicago and, of course, Bartolo Colon in Boston. Also, some smaller deals were made into Topps cards, even questionable ones like Chris Snelling and Tadahito Iguchi landing in Philly, or Yamid Haad getting called up right before the print deadline before being called back down again. It would be the last time the Update set would be so needlessly comprehensive while also leaving out obvious choices.

Some were just oversights because of deals made right after the print deadline, like Felipe Lopez being released by Washington only to sign with the Cardinals a week later. The veteran utility infielder would hit .335 in 43 games with the Cards, with 21 RBIs and 60 hits, becoming a trusted asset for a team that would fail to make a playoff run that year. 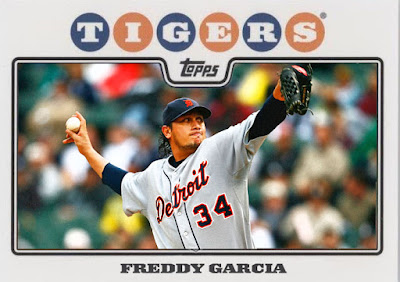 Similarly, after a down year in Philadelphia, former Mariners All-Star fireballer Freddy Garcia was a midyear sign for the Detroit Tigers, a team the sportswriters expected to win the World Series but wound up in last. The signing happened, again, after the print date. And to be honest, it's not a TON to write home about. Garcia started 3 games, posted a 1-1 record, a 4.20 ERA and 12 strikeouts. Topps has given cards to Philippe Aumont in 2015 before, but I can see why they thought that wasn't worth it.
2008 also counts as a crossroads for Garcia, sort of like Colon's 2009. After this year, the White Sox pick him back up, and Garcia becomes a trusted low-velocity trickster for the White Sox, Yankees and Orioles for the next 4 years. The 2008 season is Garcia looking at his poor 2007 and moving on, which is the best thing to do. 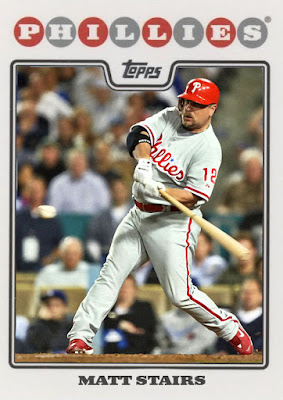 For me, this is the biggest omission.
Topps does give Matt Stairs a Phillies card in 2009, a commemoration of sorts, but...come on. Matt Stairs' career year with Philly is 2008, and he deserves a card for it.
Stairs began 2008 as a DH in Toronto, close to his home, and in August he's packed in a waiver deal to Philly to be used as a bench bat [you try starting a 40-year-old in the outfield]. In 16 regular season games, Stairs hits .294, with 5 RBIs and 2 home runs. Not bad at all. But then he makes the postseason roster, has that magical game-winning home run in the NLCS against the Dodgers, and is proclaimed the hero, even if he doesn't make much of an impact in the actual World Series. It's still a fantastic moment, which Stairs is still riding high on even 12 years later.
And I wish Topps could have known it was coming in August.
Posted by Jordan at 2:30 PM