Topps Cards That Should Have Been: 2009 Hall of Famers 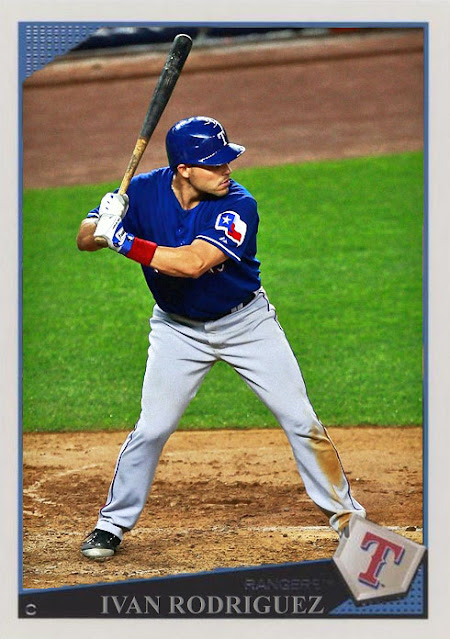 The 2009 waiver deal was merciless. Especially if you were a Topps employee.

2009 Update's checklist is finalized, the set's being prepped for production, and a ton more deals start happening that they're just gonna miss out on until 2010 Topps. You kind of just have to shrug your shoulders at that point and head to the next set.

So even though Ivan Rodriguez got a card in 2009 Topps Update, it was as a member of the Houston Astros, a team that traded him in mid-August to his old team, the Texas Rangers, in exchange for two minor leaguers. It was similar to Jim Thome's return to Cleveland in 2011- good that he's here, see him while you can, cause he might not be here for long.

Pudge did manage to hit .245 with 13 RBIs in 28 games with the Rangers. Nothing huge, but more of a steady catching performance that gave the fans something cool to see if they weren't getting to see a postseason run that year. Rodriguez would sign with Washington for two years to help progress Jesus Flores and Wilson Ramos before calling it a career. 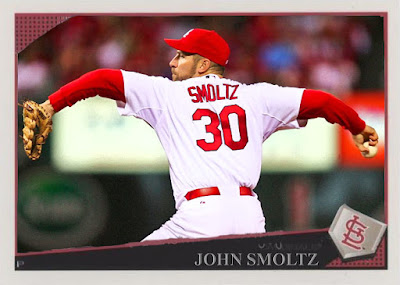 John Smoltz, meanwhile, got to pitch into the postseason in 2009.

Smoltz began the season, his first MLB season away from Atlanta, as a member of the Boston Red Sox. It didn't go well. Smoltz had an 8.33 ERA in 8 starts, and the magic seemed to be gone. After the Sox released him, the Cardinals picked him up [also in mid-August], and Smoltz began to return to his former glory. In 7 starts, he posted a 4.26 ERA with 40 strikeouts, which isn't too bad, despite only getting 1 win. He'd pitch 2 innings in the postseason, and allow 5 strikeouts in between a few hits.

If Topps had printed a little later, we would have seen these two cards in 2009 Update rather than 2010 Topps.

Posted by Jordan at 7:59 PM
Labels: 2009, Cardinals, Custom Cards, Ivan Rodriguez, John Smoltz, Rangers, Topps Cards That Should Have Been