Topps Cards That Should Have Been: 2005 Hideo Nomo 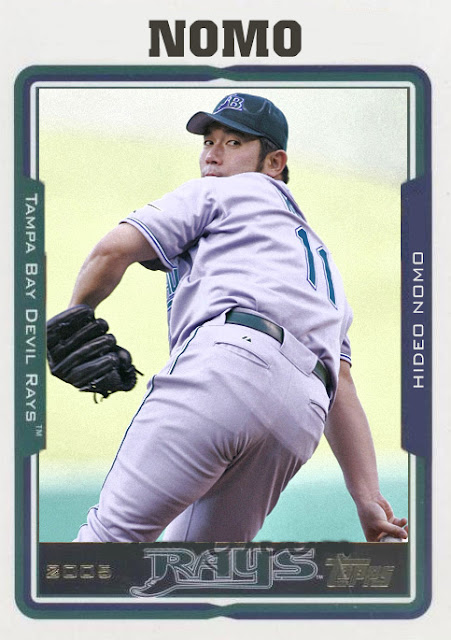 Before I get into the...odd sight of a pre-2008 custom in this project that I initially expected to only go back to 2008 for, a bit of backstory on why Hideo Nomo's 2005 stint for the Devil Rays was so horrifying.

First of all, pre-2008 Rays. That is scary enough, imo. This was a team that repeatedly finished last in the AL East, and didn't really find itself until Joe Maddon and Evan Longoria joined the team.

But this was an era of Rays baseball, not unlike now, where the name of the game was cheap free agents and homegrown unassuming players. Back then, a cheap team of sharp players you didn't think about wasn't as surefire as it is now for the Rays.

Hideo Nomo was at least an amusing risk for the 2005 team. Nomo was coming off a season where he had an 8.25 ERA, and a 4-11 record in 18 games as a Dodger. It was the third year of Nomo's deal to return to the Dodgers, and after that performance, the reunion tour was over.

So, in January 2005, the Rays decided to give the veteran hurler a shot. Coincidentally, this was the same offseason where the Rays would take a chance on Roberto Alomar, to see if he had any stuff left. Alomar decided to retire voluntarily well into Spring Training, while Nomo made the team. The intriguing detail is that Hideo Nomo does not have a Topps card with the Rays, while Roberto Alomar, playing exactly 0 games with the Rays, does. On one hand, it makes an amusing zero-year card for Alomar, on the other hand, it robs Nomo of a sunset card.

Nomo would attempt to make the White Sox in 2006, and play a final season in relief with Kansas City [I already documented this] in 2008. Not that Topps would care.

Now, as for the appearance of a 2005 Topps custom on this blog...I may have found a photo source that goes slightly deeper into the 2000s than my other one does. This one can get me at least to 2003. Which gives me a lot more ground to cover, and a lot more research to do. In the midst of my current run of 2009 customs, I might pepper in some earlier 2000s ones, though 2004 Topps customs will be tricky unless you guys don't mind the player copycat in the corner of the design not matching the player photo.

It's a promising sign for this series. Which is all I needed, considering how empty this blog usually becomes during the offseason.

Labels: 2005, Custom Cards, Hideo Nomo, Rays, Topps Cards That Should Have Been