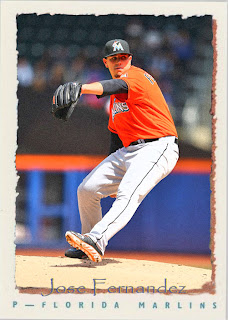 Oh, those pathetic Marlins. Look at them be pathetic.

(That right there is the topic of this post. So any Marlins fans who don't want to see their team be ripped apart by something other than their opponent's offense should best read something harmless, like dayf's blog)

Remember the winter of 2011? The Marlins sure want you to. They snatched a good number of stars, only to trade them all away (with the exception of Carlos Zambrano and Carlos Lee. I think), and start over again with a new roster of unknowns, including rushed phenom Jose Fernandez, who you see above.

Because I feel especially devious, I'm going to point out some teams that are currently doing better in the standings than the Marlins. I hate to do this, but some people out there would point and laugh at the one marathon runner finishing after a fat dude. And no, that joke isn't in bad taste because it's about a marathon.

The Cleveland Indians-  Man, these guys are disappointing. They have Nick Swisher, Drew Stubbs, Mark Reynolds and Jason Giambi all in the same lineup. And teams have been finding tedious ways to flabbergast them all. Like, oh I don't know, finding really good pitchers to strike out Mark Reynolds a couple hundred times. So right now they're pathetic. But they're not as bad as the Marlins.

Speaking of disappointments, look at those Toronto Blue Jays fall. Everybody said they'd do well this season, and I'm the one guy who got it right in saying the bottom would fall out halfway through April. Okay, I didn't predict April, I said 'early', but you get my point. Right now their Dickey is stiff and all the stars their hired to hit are too busy striking out. But they're not as bad as the Marlins.

The Chicago Cubs- I kid sometimes, that the Cubs are just kinda there to lose games and waste talent. Well, on those terms they've been doing very well. Their closer cannot close games, which is always a fun one. They're entrusting a position as a starter to a guy, Jeff Samardizijiandhfksoamdfj, whose first season or so as a starter did not go too well. Their stars are aging, and the ones who aren't are fading fast. Their pitching staff is a cobbled collection of 3rd starters from around the AL, who felt comfortable in having their careers marred. But not even the Cubs are as bad as the Marlins.

The most surprising one of there I have is the Houston Astros. Let's think about that one for a second. The Houston Astros, who spent all of last season on the DL, are still not the worst team in baseball. I'll remind you that the only decent player on the roster will likely be traded by the end of this year, and the people they hired to hit have been passed on by the other 29 teams. Rick Ankiel's on the Astros. Though it's likely that he can pitch better than have the bullpen, they pay him to strike out and possibly hit foul balls. And Carlos Pena is on the Astros. No doubt he'll only perform well when he plays the Yankees.

The bottom line here is that the Astros are a team with all young stars, some unreliable aging former All Stars, one or two decent players, a pitching staff of nobodies, that can't hit or score runs, and only win some of the time. So basically, these are the 1962 Mets. The Astros are the current embodiment of the 1962 Mets, and will be there to flounder for the rest of the season..

...BUT THEY'RE NOT EVEN AS BAD AS THE MARLINS! Isn't that INSANE?

Coming Tomorrow- A much nicer post, about a much nicer throwback uniform.
Posted by Jordan at 11:43 PM