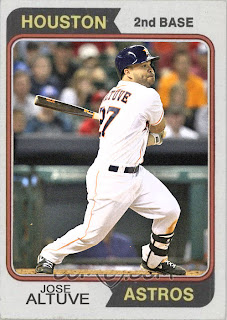 I wouldn't want to have been in a Las Vegas casino on Sunday night, the night of the first game of the season between the Astros and the Rangers. If I was a passerby in any casino, I would have seen countless Ranger fans, as well as gamblers who know the game of baseball, walking out sobbing, throwing their empty wallet in the trashcan, and resorting to a flask for solace.

Nobody in Vegas would have bet on the Astros to win the first game of the season.Which is why it's so astounding that they pummeled the crap out of Texas.

Some may argue that Texas' lead was destroyed by two botched calls in favor of Houston. However, no blown calls prevented the Astros from scoring more points than them to begin with. Besides, some players, such as Bud Norris, Rick Ankiel, and Jose Altuve were smoking the ball that night, and their homers and brilliant games led to a deserved win.

What does it say about the Astros? It says that they're not as terrible than we all thought. Sure, they may lose every other game this season, but we all thought that they'd do poorly against people like the Rangers. Turns out they're willing and able to hit and pitch well against teams as well formulated as that. They may be the underdogs of the division, but they could win some games here and there in 2013. I'm not saying they'll win the division or anything, but don't quote me if I say they won't.

What does it say about the Rangers? It says that the glory days might be coming to an end. Josh Hamilton and Michael Young were the reason people went to Rangers games, hitting well every game, playing like champions. Now that they're gone, the Rangers, while still solid, are depleted. Their pitching staff is young, and faulty. Their batting roster has some major holes. And the Astros took major advantage of their faults Sunday night. Does this mean the Rangers are dead? Not necessarily, but it means they may or may not do as well as they've done in years past. However, this basically just sets them up to ironically win the division, unless the Astros do first. But again, don't quote me.

What does it say about baseball? That it never ceases to surprise its millions of fans. And that you can quote me on.