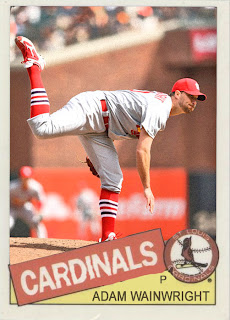 In case I haven't mentioned it already, I have a divine hatred for the St. Louis Cardinals.

Why? Well, I really don't know. I believe most of the backlash came from the 2011 season, when they overpowered my Phillies and stomped over everybody and got to the World Series. That was an infuriating team in that they shouldn't have won. It should have been the Braves getting one rung up and losing. The Cardinals snuck their way in there, and it pissed me off. It also pissed me off that they snuck into the NLCS this year. I mean, there's another infuriating team, winning the wild card, then getting past the Reds (or maybe it was the Nationals) to contend for a spot on the World Series.

Plus, one of my least favorite players, David Freese, is on that team. I don't know why I hate him either.

So, to pretend to support my spontaneously deep hatred for the Cardinals, I'm going to give my top 10 completely made up reasons I should have for hating the Cardinals.

10. The Cardinals are second only to the Yankees in terms of World Series appearances. Okay, that one's a real fact, but I'm putting it on here anyway.
9. Defeated the best team in baseball in the playoffs so many times that it's considered breaking the law.
8. Carlos Beltran killed 29 puppies during his tenure with the Mets. He's more than doubled that in his tenure with the Cardinals.
7. Caused the Spanish Inquisition.
6. Their closer is really just Fozzie Bear in a cheap disguise. And now he's injured. Wokka wokka.
5. The Warren Commission has revealed that Chris Carpenter's injury may not have been an accident, and may have been caused to keep the ace out of the picture for 2013.
4. Let the best player in baseball end up on a mediocre AL team.
3. Didn't follow through with fulfilling my wish to have David Freese run over by a tank.
2. Hired extras from Lost as their infield, save for Rafael Furcal.
1. Those birds on all the caps? Yeah, those aren't drawings of birds.

(These are all fake. Please don't kill me, Fozzie.)

Coming Tomorrow- The Marlins are terrible. Here's their hot young star.
Posted by Jordan at 10:20 PM