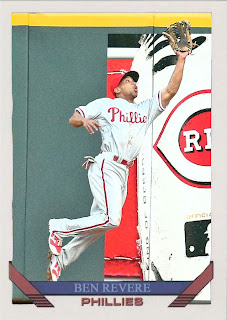 So far, the Phillies have been playing poorly. As a matter of fact, I don't think I've seen this type of mediocrity from the Phillies since before Ryan Howard joined the squad. They've become a pathetic joke of a team, with players jumping onto the DL, pitchers getting hounded at the plate, and great pitching being spoiled by not having any offense to back it up.

However, one star that still shines in the Phillies' lineup is one they got from Minnesota. All it took was giving the Twins their best starter, and we have a nice fielding outfielder in Ben Revere. He's fast, he's young, and he's very good at his position. While he's not the world's best player when it comes to hitting, he's still very versatile and has been one of the few decent additions to the team.

Michael Young, while doing simply alright, hasn't done much to affect the offense. John Lannan has given lackluster pitching attempts to a team defined by its non-lackluster pitching. Even people like Domonic Brown and Eric Kratz have failed to produce more than just what they did in Spring Training. But I have a feeling that Revere will do well for the Phillies, and possibly lead them along to better days.

Aaaaaaaaand he's been benched. Well, so much for that.

Coming Tomorrow- What's that? The Brewers have a gigantic streak going? Somebody get me a custom of that pitcher dude who's the only decent star besides Ryan Braun, stat.
Posted by Jordan at 9:27 PM
Labels: Ben Revere, Custom Cards, irony, Phillies