Custom Card of the Day: I was Wrong Edition 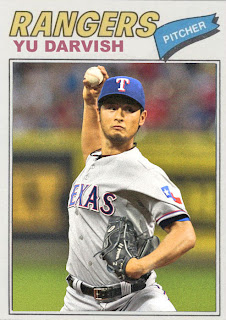 If there was a running tally of how many times something I predicted happened with the opposite outcome, that thing would already have overflowed. Which is why it doesn't really shock me that my entire post from last night was deemed completely wrong not even an hour later.

For those of you who haven't read it, which is most of you, it regarded the sheer astonishment over the Astros winning the Opening match against Texas. I then said that this meant the Astros could do well, and that it might be the beginning of the end for the Rangers.

Well, there goes that prediction, right?

Not even an hour after posting this, I get the news that Yu Darvish is pitching a no-hitter into the 6th. And that's when it sorta turned for me. This meant that A.) Texas was playing well, B.) Houston was NOT playing well, and C.) I was wrong yet again.

I mean, when you look back at last night's game, the only Astros player (besides Lucas Harrell) who made a decent enough effort last night was that guy who broke up the no-hitter. And maybe the guy that hit him over to second. And also, the Rangers had a ton of hits last night. So basically, everything I said was untrue. The Astros cannot hit. The Rangers actually are great. The Rangers might actually do well.

That being said, I am pretty happy for Yu Darvish. I know the perfect game was halted by that unnamed guy (let's just call him Brendan Ryan, because he broke up the last no-hitter I was remotely interested in), but still, the guy had a tremendous game. I think he's a really good pitcher, and I think that he could end up doing really well this season, unless he gets injured or some crap like that.

As for the Rangers, I still don't think they'll make it to the postseason. However, don't quote me on it.

Coming Tomorrow- As promised yesterday, the top pitcher for the Angels.
Posted by Jordan at 9:15 PM

Labels: Astros, bad timing, Custom Cards, I can't predict anything can I?, Rangers, woe is me, Yu Darvish