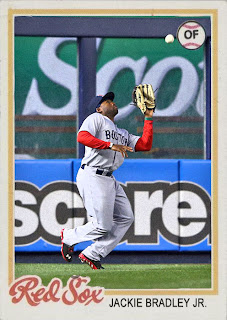 This is my first Red Sox custom of the year. I hadn't had any awesome photos of Victorino or Dempster, or any of those guys. I'm just happy customizing someone that might be very good for them for a while.

When this guy was called up and thrown onto the roster a week ago, it was a pretty big deal. Jackie Bradley Jr. had been a nice prospect for a few years, and it really felt logical to put him in, right next to Victorino and Ellisbury (I think).

As of late, he's been playing well, quickly hitting big and making fans. However, this may or may not help the overall fact that his division is wide open. As I explained a few posts ago, pretty much anybody could take it. The Rays could take it, which is pretty highly favored. The Blue Jays could take it if things go absolutely right for them. The Orioles could take it if everybody else gets injured. Hell, even the Yankees could ta- wait, what am I saying?

But the one team nobody has talked about here is the Red Sox. And they very well might do well this season. They started off the season by winning two out of three games against the Yankees, and sloshing them all over the place. They have decent enough pitching, a good lineup. It could happen. I'm not saying it will, but it very well could.

But that's how open the AL East is. When even I am saying that a Red Sox win isn't far off, you know there's something wrong.

Coming Tomorrow- Speaking of teams that spent their first three games sweeping teams I root for, this guy is FINALLY reclaiming the glory of his rookie year. And it couldn't have come at a better time.
Posted by Jordan at 8:39 PM