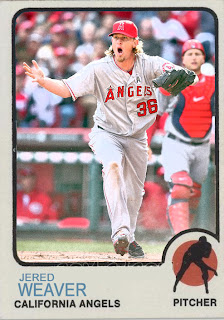 Last year everyone thought the Angels were gonna win the World Series. They didn't. They landed with a thud in third place, thanks to a slow start by one of the game's best hitters. And now, they're still projected to win their division, and top the A's and Rangers. Can they do that? Well, now they have a stronger lineup, and a stronger pitching staff, so it could happen.

Of course, the pitching staff has always been kinda strong in Anaheim. Thanks in part to pitchers like Jered Weaver, the Angels rotation has been one of the most consistent in the AL. Jered Weaver is also one of the game's most ferocious pitchers, becoming a nice strikeout artist, and pitching a nice no-hitter for himself last year, which was nice.

This year, the Angels need to prove that they can put the formula together, and actually make a good baseball team out of those materials. If that happens, they might actually have a pretty nice season.

Coming Tomorrow- Wow, we haven't heard from this guy in a while. He was once considered to be an amazing third baseman, and then he spent 2012 on the DL. Now, he comes back at the exact right time, when his division is anyone's for the taking.
Posted by Jordan at 9:18 PM