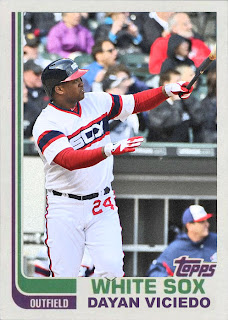 I feel like this week is 'Themes that Jordan has Mentioned Over 500 Times Week'. I mean, a few days ago I did a Cardinal, then I did a post on how terrible the Marlins are, and now I'm doing a post on throwbacks. Which means tomorrow's will most likely be deemed wrong by the end of the year. See? I'm consistent. Just sporadically consistent.

Anyway, as much as I think Dayan Viciedo is the future of the White Sox, and that he's gonna be big, I want to draw all the attention possible to that throwback. This was what the White Sox were wearing in the 70's and 80's those futuristic uniforms that baffled everybody. But they always looked cool to me. Hell, Tom Seaver even wore them for a season or two. And now they're having the White Sox wear them every few weeks (they just had them yesterday). That is awesome, because those uniforms are cool, AND I haven't done a throwback custom in that uniform.

Still, even if I've done what seems like 30,000 throwback customs, there are one or two uniforms that have eluded my grasp. So I'm going to list the top 5.

5. 1980's Mariners. You probably know exactly what I'm talking about. Blue hat, yellow S. Blue-teal uniforms with a mostly grey base. Those would be so cool to customize. They've already done the 70's ones, so there is hope. If not, I'll settle for the teal 90's uniforms.
4. Seattle Pilots uniforms. I don't care if the Brewers or the Mariners wear them. These ones are cool, and they're a great rememberence of a team that only lasted two seasons. Wouldn't it be awesome to see Ryan Braun and Jean Segura trudge around in pilots uniforms? That might not ever happen, but I'd love to see it.
3. Montreal Expos uniforms. Being that the Nationals are not in Montreal, this will probably never happen. However, I for one would love this to be brought back, simply because I do like those old uniforms, especially the 80's ones. Get Strasburg, Harper and Werth in those. That would sell. That would be absolutely awesome. Or, better yet, if you ever expand to 32 teams, just reinstate the Expos. They won't harm anybody.
2. 1970's Pirates. I know for a fact the Pirates have done these (they just did them yesterday I think), but the most infuriating thing is that I can never get the right picture. Like, they'll have the uniforms on, and they'll lose, and Zimbio'll only print pictures from the winning team, and just the pitcher, James McDonald or someone crappy like that. Or they won't have any good photos. Or they'll have good photos, just of people I've already done. Just do the 70's ones, with the yellow caps. Or better yet, do the yellow uniforms with the black circled hat.
1. 1990's Marlins. I've said it before, and I'll say it again: the only thing that will make me respect the Marlins again is if they bring back their teal uniforms. Some may call them ugly, I call them genius. They were hip, and it only could have happened in the 90's. Which is why, for one night, the Marlins need to wear teal. I don't care if they don't want to, they just need to. I will manage to customize as many of them as humanly possible, or maybe just the stars like Juan Pierre and Giancarlo Stanton. Please. Just once.

Coming Tomorrow- Not a hoax! Not a dram! Not an imaginary tale! The Rockies, who last year were almost as bad as the Astros, are the best team in baseball. Here's their star shortstop.
Posted by Jordan at 9:52 PM