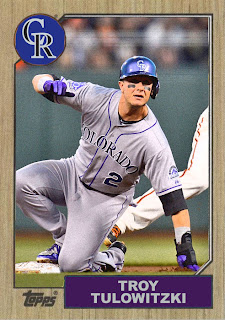 Last season, the Rockies were atrocious, making even the Padres seem formidable by comparison. They had no pitching, only a few specks of hitting, and sank lower than Delmon Young in a swimming pool. A lot of their stars were injured, or just not playing well.

I have no idea what happened, whether their pitching just got better, or the people that weren't hitting suddenly became great hitters, but they're leading the league right now. Again, this is absolutely improbable, and it wouldn't surprise me if the Rockies sink back to 3rd or 4th before the season's out. But, whatever they've been doing has been working. People like Dexter Fowler, Michael Cuddyer, Carlos Gonzalez and the man you see above have all been playing very well. Tulo especially, finally giving some bang for the surplus of buck the Rockies have been giving him.

Again, the Rockies are huge, and I don't know if they'll still be huge in a month, but they are now. Woo hoo.

Coming Tomorrow- Meanwhile, in the same division, a once-great team slides to third, and hopes to reclaim the stuff of their earlier days (read: 2 years ago).
Posted by Jordan at 8:47 PM