Custom Card of the Opening Day 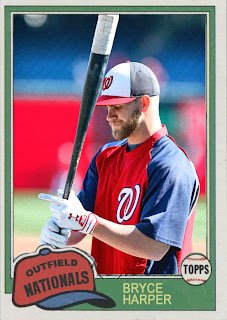 Youtube will not be ending on April 2nd. Blogger has not banned humor in posts. And Peter Dinklage will not be replaced on Game of Thrones by the guy from Willow. All of those stories were made up for April Fool's Day, and are bullcrap. However, something happened on April 1st that ISN'T bullcrap: Bryce Harper hit two home runs against the Marlins. What Sophomore Slump?

As if the eyes of America were not already resting on Harper's shoulders, he proved that he was here to stay by blasting two straight homers off of Ricky Nolasco, proving once and for all that the Marlins were downright terrible. It also proved something a lot of people were waiting to prove: this Harper kid has some staying power.

Bryce Harper's rookie year was all that every scout that found him hoped it to be and more. He hit well throughout the season, scored an All Star Nod, and won the Rookie of the Year prize, all while infuriating every other fan watching. People couldn't believe it. They expected Bryce to go away, flame out and disappear like the other huge rookies, such as Joe Charboneau, Mickey Klutts, and Chris Coghlan.

Harper's two home runs on Opening Day made him the youngest player in MLB history to accomplish that feat, and remember folks that this is only the beginning. He hits two today. Imagine how many he'll hit over the course of 161 more games.

Bryce Harper is hopefully here to stay. Any other accusation would be comparative to that of a children's circus performer, sibling.

Coming Tomorrow- A much shorter post, on a much shorter player, whose chances at making the postseason are much... shorter.
Posted by Jordan at 9:03 PM