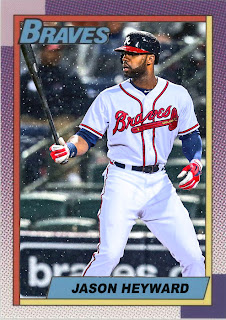 Every year, for the past few years, with the Phillies being good, the Mets being bad, and everyone else filling in holes, I've always said the exact same thing at the beginning of the season:

"The Braves will come in Third"

Most of this time this prediction does not come true, as they usually find some way to mosey their way to the top. You have to hand it to those Braves; they are terrible at being terrible (also, their fans find inexplicable ways to get TMBG songs stuck in peoples' heads.) They're also terrible at sticking to the plan.

Also terrible at sticking to the plan: Jason Heyward. Every season since his rookie year, he's been plagued by comparisons and people thinking he's peaked, and this and that. What these people need to understand is that the pressure isn't making J-Hey any better. Last season he hit 20 home runs, and had a nice season in the outfield. It was nowhere near his 2010 effort, but honestly do you expect it to be? Hell, the only player recapturing the glory days of 2010 last season was...uhhh, Buster Posey. But THAT'S A BAD EXAMPLE!

I predict that J-Hey's gonna have a great season, one that's gonna put all the naysayers aside, and finally end all the backlash. The team's gonna outdo expectations too: they have way too many Uptons to just end up in third. I wouldn't be surprised if they traded Juan Francisco to Detroit for KATE Upton (rimshot). But I digress.

To sum up, J-Hey's gonna have a great season, the Braves will come in higher than third, They Might Be Giants songs are infectious, the same old stuff.

Coming Tomorrow- He set an MLB record by hitting four home runs with multiple RBI in his first four games. How's that for a return to form?
Posted by Jordan at 10:08 PM
Labels: Braves, Custom Cards, Jason Heyward