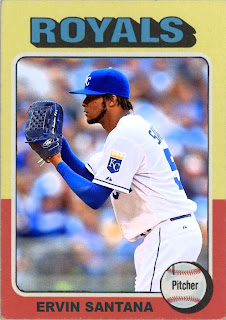 Ervin Santana is a great player on a new team, and the card looks amazing. Yeah, yeah. But the man on the card isn't the main inspiration for this post.

Like me, my father was into cards as a kid, and as a teen. He's one of the reasons I got into the hobby to begin with; his old stacks of 70's and 80's cards made me want to see the new stuff. And ever since we got a decent sized stack from his mother's place, I, as a kid, sorted them out, by year, by team, hell one time by position.

He started collecting sometime in the 70's, but the first set I remember having a decent amount of is the 1975 Topps set. Later on I found out that the 75 set is one of my dad's favorites, and I can see why. The varied colors, the great shots, the overall fun aspect. It was a cool set, and a great one to be introduced to Topps with. Now while my introduction to Topps cards wasn't as awe-inspiring (2007 Topps), I sorta envied that the 75 one was one of the first glimpses he got at cards. And I can see why he was hooked on them.

One of the things I noticed when I looked back at my dad's old cards was his own Update set. This is a bit embarrassing, but as a young kid I don't blame him. What he would do is take cards of people who had been traded, and draw on them with a crayon "TRADED TO:" and he'd put the new team. I own a particular version of a 1975 Jim Hunter of him on the A's. The 'A's' had been crossed out, and replaced with 'Yanks', and he even drew a Yankee emblem on his cap. These little variations were fun, and nice gems when looking over cards. Heck, I wish cards were still cardboard. I'd scribble 'YANKEES' on my Kevin Youkilis cards anyday.

Still, for his day I wanted to make a decent enough custom, one that would potentially belong in one of his favorite sets, and a gift that would make more of an impact than a bag of M&Ms that will be gone in a week, or a t-shirt that'll have a hole in it in five years. If I had more time to prepare, I would have made a Yankee, but I already have made enough of those in 1975.

Happy Birthday, Dad. You're one of my inspirations, in collecting, in writing, and in almost everything I do. Thanks for being there, and I hope you see 1,000 more birthdays after this one.

Coming Tomorrow- How do you follow one of the more heartfelt posts I've written? With a gigantic beard.
Posted by Jordan at 9:26 PM