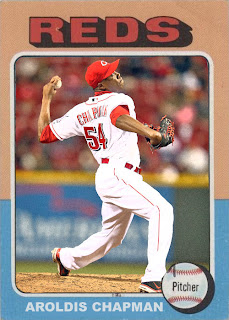 Back when the Reds acquired Jonathan Broxton, I explained that Aroldis Chapman should be used more, and should be promoted to starter, which actually happened. However, looking back on it now, I have to say that my opinion was a bit skewed, and that Baker was right in moving Chapman back to closer. Why? Well, to explain that would mean I'd have to explain something I'd like to call "The Hulk Factor".

You see, back in the early 2000's, when every superhero was getting his own movie, it was decided that the Incredible Hulk should receive his own as well, directed by Ang Lee. It was too long, too boring, and too terrible. Five years later, they tried again, only with a French guy, Louis Leterrier, directing. It was shorter, but it was disappointing, and flawed.

For a while, it seemed like there'd be no satisfying version of the Hulk. Then last year, he appeared in the Avengers, and was arguably the best part of the movie. Why was that? Because if he was handled in smaller chunks, and given less duration, then he'd be an effective and awesome character. If you devote too much time to the Hulk, give him a needless emotional complex and some random plot devices, the character is non-effective, and you get bored with him.

Dusty Baker must have seen the Avengers, because what he did with Aroldis Chapman is very reminiscent of this.

You see, if Chapman had remained a starter, he would have blown out his arm, and overstayed his welcome. 7 innings of Aroldis Chapman once a week would be tiring, and his career might not last as long. Now if he  is switched back to closer, you get one inning every day or so of him pitching 100+ mph fastballs and wrecking batters. Here he won't overstay his welcome; here he'll thrive and people will finally see how awesome he is.

Coming Tomorrow- You know what we haven't had in a while? A good Red Sox prospect. Not like a good prospect for the Red Sox (Will Middlebrooks or Daniel Nava), I mean a good prospect for baseball in general (like Pedroia). And I have a feeling that this guy could be that kinda prospect.
Posted by Jordan at 11:15 PM