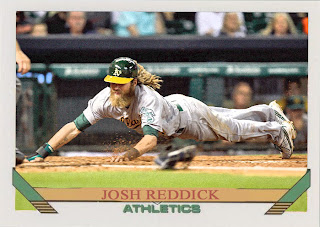 My gosh, look at that beard.

Of late, there's been a resurgence in excellent baseball facial hair. We've had people like Brian Wilson, Sergio Romo, John Axford and Jason Motte giving the facial hair dynasty another run. However, this season we have someone who basically said 'screw this', and stopped shaving altogether.

This season, we had the first appearance of Josh Reddick's Prehistoric Beard.

I love that beard. If has overtaken Brian Wilson's for my favorite in baseball currently. That thing is overflowing, effervescent, and even has the long hair to go with it. I mean, look at that shot. The beard is enough, I mean the beard would have definitely taken that pose over the top. But the McCutchen-esque hair flowing out the back, that takes it to hyperawesome.

Imagine if he keeps it going. Imagine if he keeps growing that through the rest of the year. His hair will cover his uniform name, and his beard will look even more like a caveman than before. It'll be awesome. If he shaves it, it'll just be a letdown, like Jayson Werth or Dr. Phil.

Seriously, he's a great player, but he's even better with that beard.

Coming Tomorrow- Since I won't be giving you a Zack Greinke for a few months thanks to Carlos Quentin, tomorrow you'll get the perennial star of the Dodgers.
Posted by Jordan at 8:50 PM