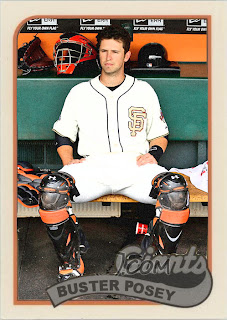 I know it's sacrilegious to follow a Dodger with a Giant, but what are you gonna do? I didn't time it like that on purpose. I just happened to follow a great custom with another great custom.

I feel like the Giants have been very underwhelming so far this season. Today, for example, they lost to the Brewers, a thoroughly unspectacular group of players, on a homerun by an inebriated pitcher. So naturally, their slope is headed downward, which is sad, because that team is pretty fun.

I think that Buster Posey, if he stays healthy, has a chance to have a pretty nice career. I mean, in the two seasons he's been healthy he's won two World Series', a ROY and an MVP. Which are some pretty nice crudentials, and which means he's an MVP away from basically being Johnny Bench.

I don't know if the Giants will rebound this season, or if they'll just pave the way for somebody else to win the NL West, but hopefully Posey will have another high-Homer season.

Coming Tomorrow- What's that? I haven't done a St. Louis Cardinal all year? Well here's one. The pitcher that's kinda holding the team up with one arm.
Posted by Jordan at 8:56 PM