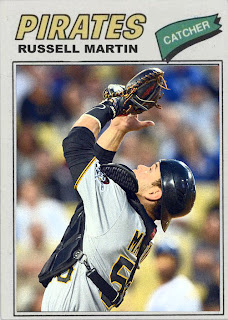 You always feel sorry for the guy that comes after the legend. Just ask Richard Todd. He took over as QB for the Jets after Joe Namath, and is now a punchline in the NFL. Just ask Tony Batista. He attempted a herculean effort of being the new Orioles' shortstop the year after Cal Ripken left, and fans quickly found out that he wasn't Cal Ripken. Just ask Ray Handley. Yes, Giants fans, I am bringing up Ray Handley.

The most recent example of backlash against the guy who followed a legend in his position: Russell Martin. I really don't know why he got so much backlash during his two seasons in New York, though a lot of it might have had to do with the opinions of a certain Dodger blogger. I know that taking over for Jorge Posada is a tough thing to do, but I didn't think Martin was too bad. He had a few nice homers last season whenever I was in the room watching, and his .199 whenever I wasn't. He was a pretty good defensive catcher.

The main reason why the backlash must have happened may have had something to do with what he did for the Dodgers. Yes, he was an amazing catcher for the Dodgers, and he got numerous All Star nods and gold gloves and accolades. And he got none of those while with the Yankees. Maybe it just went downhill or something. Maybe it's just the backlash against New York in general.

Nevertheless, he's met up with another former Yankee who met a lot of backlash in his day (AJ Burnett), and he's currently playing pretty well for Pittsburgh (though not stealing the spotlight from Andrew McCutchen). I'd say the backlash has subsided, and maaaayyyybeee the Dodger fans will forgive him for his acts in pinstripes.

Though I imagine that they probably won't.

Coming Tomorrow- In 2014, in Yankee Stadium, during the ninth inning, you'll no longer hear Metallica's Enter Sandman. The Greatest Closer of All Time, making the rounds of his definite Hall of Fame season, is still soaking it all in.
Posted by Jordan at 9:43 PM