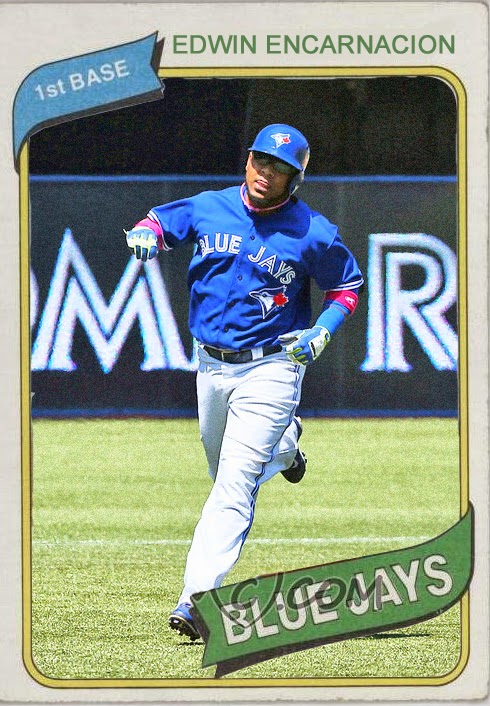 It just blows me away.

The two top home run hitters in the American League come from the AL East. Neither of these hitters play for the Yankees.

I'm not trying to diminish the huge start that Edwin Encarnancion's having. Far from it, really. Him and Nelson Cruz are really hitting well, and I applaud Edwin for doing it without the use of steroids. But...didn't the Yankees just get a couple home run hitters for Christmas? You know...Carlos Beltran and Jacoby Ellsbury?

Any other year, you expect somebody from the Yankees leading the AL in home runs. Because any other year, Cano, or Granderson, or A-Rod would be atop the list. All three of these players are out of commission, because they're currently in Seattle, Queens....and the Rodriguez Mansion, counting money.

Is that what it's come to? Has the balance of power in the AL shifted from the Yankees...to everywhere else in the AL East? I mean, you also have people like David Ortiz, Jose Bautista and Adam Jones bashing the ball around. You'll notice that nobody from the Rays has more home runs than people on the Yankees because...well, screw the Rays.

Mark Teixeira has 13 home runs by the way, and that is the most by any Yankee right now. Edwin Encarnacion has him beat by 11 homers. You know how many Yankees have that many home runs right now? Only one. Brian McCann has 8 right now. Bottom line- you could make an entire All Star caliber outfield made up of people who have hit more home runs than people on the Yankees. Hell, GEORGE SPRINGER, a guy who has been around this season for less games than most of the people on this team, has more home runs than anyone on the Yankees.

So really...guys, keep up the good work. Edwin Encarnacion, beautiful job. But...Yankees, come on, I need some more effort. You guys used to be the embodiment of home runs in the AL. Now you're being outfoxed by some Astro who's close to MY age. Pick up a bat and start hitting, please.