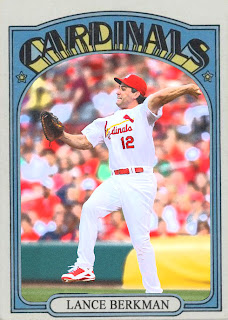 Have you ever made a prediction, only for it to go the exact opposite way you think? For me, that was Lance Berkman this year. When I posted a custom of him back in March, I had no freaking clue that he would have the season he's having this year. And yet...somehow, he did. He hit home runs by the ton, he made it to the All Star Game...and it made me a fool. Because when I posted that custom in March, I said something along the lines of "This is an odd choice for the first week of customs, but he's still going to have an okay season". And I was wrong then. It wasn't an odd choice for the first week of customs, because he'd be one of the best players of the season.

Which is why a few days ago, I figured that Mr. Berkman deserved a do-over. I thought that since the first custom was so nondescript, and bland, and that was before the season he's having, then I could do a better custom in the same design, that's actually eye-catching. And I think it worked.

Coming Tomorrow- His team is having the comeback of the century this year, and he's leading the pack.
Posted by Jordan at 10:02 AM
Labels: Cardinals, Custom Cards, Lance Berkman