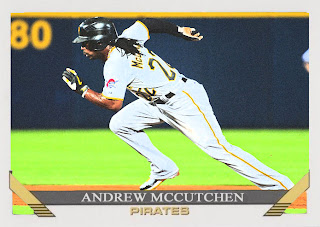 It's a shame there aren't enough vintage Topps designs that went sideways. Because of that, the fury of Andrew McCutchen can be expressed horizontally only a few times. Last year I gave him a 1974 sideways, and now I'm giving him a 1993 sideways. And there weren't that many players still playing in 1993 who were playing in 1974, other than Nolan Ryan. One person. That's the same amount of people who predicted that the Pirates would be where they are this season. Because it's one of the most surprising comebacks in MLB History.

Andrew McCutchen is the heart and soul of this team. Sure, there's Neil Walker, and that pitcher kid, and Jose Tabata. But none of them can play their position like Cutch. He runs at full speed in the outfield, and rarely fails. And he hits pretty well also. I'm not saying that one guy is powering an entire 30-man roster, but he's trying.

So if the Pirates don't end up making the playoffs, at least McCutchen will get another go at it...unless they shamelessly trade him away.

Coming Tomorrow- A teammate of one of Baseball's biggest stars is thriving the season the star is injured. Sounds a hell of a lot like a Damon/Affleck movie, but it's happening in St. Louis.
Posted by Jordan at 8:17 AM
Labels: Andrew McCutchen, Custom Cards, Pirates